By Glenn Astarita
November 3, 2019
Sign in to view read count 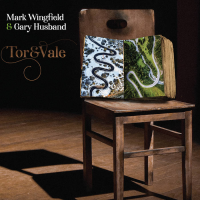 Before receiving widespread exposure as the keyboardist with John McLaughlin's The 4th Dimension band, Gary Husband's notoriety was firmly centered on his polyrhythmic progressive rock and jazz drumming, rising through the ranks by accompanying prodigious guitarists Allan Holdsworth and Robin Trower, amid stints with Level 42, UK and other notables. Moreover, idiosyncratic guitarist Mark Wingfield's notoriety has skyrocketed since joining Moonjune Records several years ago. On this outing, Husband (piano) and the guitarist delve into improvisational and experimental constructions, where they maintain an undulating flow within a pristinely recorded sonic space.

Wingfield's slithery and liquefying electric lines and fluent mode of attack is consistent throughout the program, as Husband counters, mimics and contrasts while also taking the lead, and offering contrapuntal passages on a recurring basis. The proceedings are occasionally tinted with barely detectable background effects, overlaying climactic movements and the guitarist's searing single note flurries and a few cantankerous movements where the duo experiments and live for the moment, so to speak.

"Night Song" follows suit with several tracks via Wingfield's resonating extended notes, melded into a sanguine lullaby, dappled with Husband's delicate block chords and acute counter maneuvers. However, the musicians segue into vibrant improvisational sub-themes during the bridge, as the guitarist's penetrating sustain licks spawn a haunting vista. Yet "Tryfan" contains bump and grind progressions, accelerated by Wingfield's stinging riffs and somber volume control-induced tonalities towards the finale. On the flip side, a bit of listening fatigue set in towards the last third or so of the album, partly due to the 75-minute length and unswerving soundstages on a per-track basis. A little editing may have negated this vibe, but it's a minor complaint. Ultimately, the duo's persuasive inner workings and entrancing call-and-response episodes are at times fascinating with the output equating to a synergistic effect.