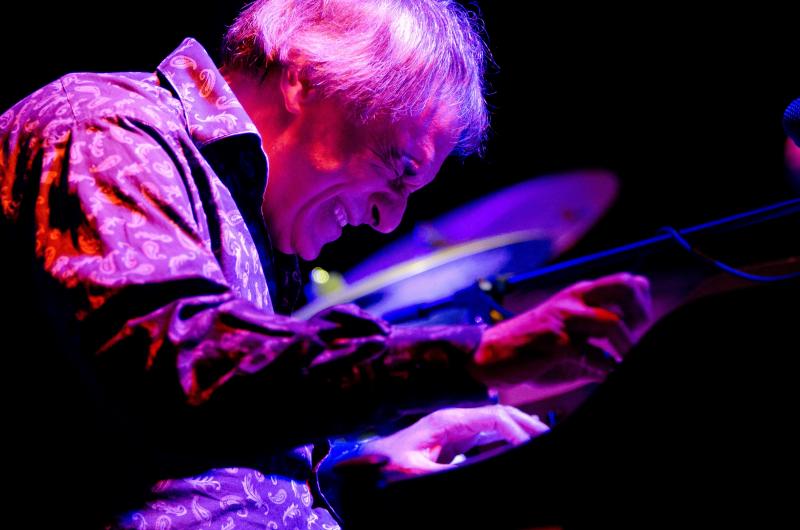 When it comes to jazz hotspots in Ohio, the choices are relatively small. All that changed about a year ago when developer Tony Troppe and VP of Talent and Events Mike Wyatt II got together to put Akron on the map as a jazz destination with the opening of BLU Jazz+. With live jazz every Wednesday through Saturday evenings, the club has the distinction of recently being named by Down Beat as one of the top jazz clubs in the world.

Housed in the basement of a historic sandstone and brick building built in the 1870s, the club exudes all the qualities of hipness and cool. Exposed brick walls display vintage black and white photos of such greats as Gerry Mulligan, Billie Holiday, and Dizzy Gillespie. These works by photographer Frank Kuchirchuk were taken at the iconic Cleveland club Lindsay's Sky Bar in the '50s and have been stored in the archives of the Oberlin Conservatory for decades.

The gentle curve of the entrance area, which sports more gallery space, leads to the bar and a few couches. A modest wedge situated in the right corner, the stage can be seen from several vantage points, including the bar area and a generous seating section in front on two levels. Neon and ebony painted rafters add a touch of contemporary flair to this cozy and welcoming space, which also features state-of-the art sound.

On a schedule balanced between regional talent and nation acts, a recent post-Thanksgiving offering featuring Tony Monaco was adrenaline-charged on many levels. A Columbus, Ohio native, the organist is somewhat of a prodigy, taking guidance from such heavy hitters as Hank Marr, Don Patterson, and Jimmy Smith at an early age. The late bloomer only started making a name for himself when fellow organist Joey DeFrancesco offered to produce his first album in 2000.

Put together just for this show, Monaco joined forces with local and budding guitarist Dan Wilson and Pittsburgh drummer David Throckmorton. While Wilson has been touring and recording lately with Monaco's mentor DeFrancesco, Throckmorton can boast a resume that includes stints with Maynard Ferguson, Sleeping Giants, and currently Bill Deasy. The trio came together from bar one and Throckmorton's incendiary style was clearly an inspiration to the equally combustible Monaco.

Within the span of the first two numbers, Monaco and company began to gel their collective styles, first with a fast blues number and then over the course of a George Benson-penned bossa. Tony's own original, "I'll Remember Jimmy," literally hit all the stops that made Jimmy Smith a legend, albeit with Monaco's own individual style at the fore. Cooling things down, the trio then delivered "But Beautiful" with elegant panache, highlighted by Monaco's own vocal contribution.

Inclined to allow the spirit of Jimmy Smith to linger a bit longer, Monaco's next move would be to tear the hell out of the funky "Root Down." While his many peers tend to gravitate towards the Larry Young school of organ, Monaco is without equal when it comes to technical mastery of the instrument and engagement of the audience. Few can touch Tony when it comes to the dazzling displays of technique that could be heard over the course of his lengthy solo.

A perfect foil to Monaco's combustible offerings, Wilson's approach was no less engaging. He would alternate single note licks with octaves and chordal passages, telling a story with his own solo moments. On "OGD," Wilson generated momentum by using repeated riffs a la Grant Green and on "I'll Drink to That," his thick tone recalled that of Gene Edwards on Groove Holmes' classic Soul Message LP. Clearly, the guitarist has done his homework and that vernacular has integrated itself into his own muse.

As the second set progressed, there would be additional moments of greatness. Monaco lent a tip of the hat to Jimmy McGriff with his cover of "Yardbird Suite" that featured some great sound effects. By contrast, a lighter "Mack the Knife" found Monaco dialing in the stops similar to the ones Smith used on Crazy, Baby!. Although there were ample opportunities for trading bars throughout the show, Throckmorton would be featured at length on "Caravan." His rim clicks would be the start of a slow build that led to thunderous tom fills, all the while keeping the form in a mighty display of chops and finesse.

A tour-de-force run through "Ode to Billy Joe," inspired by Lou Donaldson's version on Mr. Shing-a-Ling, capped off the evening with Monaco literally running both hands up and down the keyboards. An "Amen" coda logically led to a churchy "Amazing Grace" that barely cooled down what had earlier been a three-alarm fire. That Monaco could make such great music with two gentlemen that he had just met hours earlier is a testament to all three talented musicians. That you need to experience Monaco in person for yourself goes without saying. Words just don't do it justice.