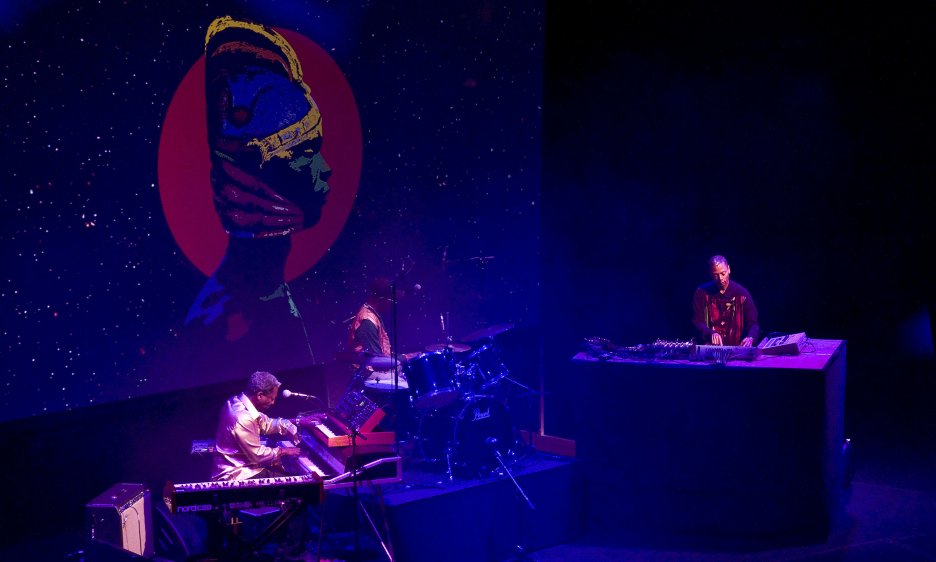 The festival's conclusion featured Afrobeat icon Tony Allen and techno titan Jeff Mills at the Cologne Philharmonic Hall, probably the city's premiere musical venue. That building isn't known as a place to dance, but for at least one special Saturday night, things changed. The event's billing aligned with the release Tomorrow Comes the Harvest (Blue Note/Universal 2018) Since that recording clocks in at approximately 30 minutes, there was plenty of time to enhance the original percussive patterns.

The set was no return to forever in terms of fresh ideas, but the rhythm and repertoire kept things right most of the time and a group of approximately 1,650 listeners looked very satisfied throughout a set that ran basically nonstop for over an hour and a half. Considering the multi-rhythm depth of material, it seems a bit odd to designate the concert as minimalist, but in general that's what it was. Most of the set remained repetitive. Allen kept a near robotic cadence on the high hat, cymbals and rims while Mills tapped out booming, bottom line sequences in syncopated bursts of modulated meters. The more effects he added the better the compositions progressed.

An extended morph of "Locked and Loaded" opened the evening through organ tones that hinted toward a funk-like groove while Mills adjusted various synth bass lines. At times during drumbeat duets, the machines were indistinguishable from the skins. When Mills tapped on his decks and flashed his hands while Allen was relatively motionless it was easier to determine Mills' beats from Allen's sticks. There was a tidbit of amusing irony as Allen occasionally snapped the snare with his palms while Mills tapped a fingertip pulse. How much, if any of the actual drums Mills may have looped while live was an intriguing question that the ear couldn't easily answer.

After the initial 30 minute jam reached an impressive crescendo the fans' screaming response proved that if a customer is always even marginally correct, this was a night to remember. Whether or not new frontiers were explored didn't matter. Any timelined techno classification became a contradiction in terminology and live beats were clearly the only point.

"As you can probably tell, we're making it up as we go along," Mills told the assembly, which cheered in response.

Though his name didn't grace the marque, Dary was an equal contributor onstage; mainly hitting one or two keynote reverb chords on the organ. The brief breaks when Dary stretched out his one-handed solos on "Altitudes" were highlights of melodic abstraction. Mills went old school a couple times, picking up a tambourine with clarity that served surprisingly well amidst near-constantly cascading layers of clear sound quality. "On the Run" featured more conventional chords and included the closest thing to a drum solo Allen took. Mills added to the song's slick tempo with some resounding, nicely bottomed echo.

The concert raised a vital, state of the art form question about present day mass perception. It definitely wasn't what someone's grandfather would call jazz, but it might be exactly what someone's grandchildren consider it ten years from now. Of around a half-dozen people informally polled immediately after the show, every one of them classified the music as either "jazz" or "techno-jazz." Welcome to the future? Looking back nearly four decades to distinct parallels with Herbie Hancock's Headhunters (Columbia 1973) adds to the debate.

"Jazz can consist of anything," Allen mused prior to "The Seed," while surveying the seats. "We're hoping you're feeling something, but this place was made for classical music so maybe you have to sit down." The crowd picked up on their cue. As the penultimate jams progressed, more and more people stood and started to dance and yell.

Any legitimate assessment of performance art should include the audience's reaction. This was a rare time that many people stood and danced at Cologne Philharmonic. For that reason alone, repetitive format or not, the show must to be considered a rousing success for the trio and for the promotion. It may still be a little early to declare that it's really harvest time for this project, but that doesn't mean that Allen, Mills and Dary couldn't deliver a feast.