The Who: Tommy Deluxe Edition 2013 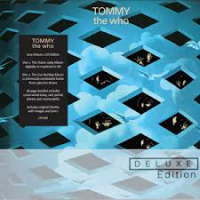 The white-hot intensity with which The Who play their rock opera on the second deluxe edition almost, but not quite, renders moot any reservations about the concept of the package. Far from merely coasting in the afterglow of the appearance at Woodstock that galvanized the band as much as the audience, the quartet sounds flush with confidence, authority and abandon as they play Tommy. The uniformity of the sound, even rough as it is, belies rumors of the recording not necessarily derived in its entirety from a single show on the group's 1969 tour (the varied sources of which may explain the lack of detail in the credits).

That progression of power would continue in the Who's presentation of guitarist Pete Townshend's magnum opus until the next year, when it was effectively retired from the repertoire of the original four man lineup. It's unfortunate that successive archiving of Tommy has not followed a similar path of improvement: the first 'Deluxe Edition' has a CD full of (largely) unreleased studio outtakes that illuminate that recording process, insight into which on this release is available only in the 'Super' format.

The CD full of demos in that package, done in Townshend's home studio, no doubt would be perfectly complementary to the outtakes and alternate versions done with the group, not to mention enlightening in juxtaposition with the official recording here in remastered form, the sonic quality of which is superior to its predecessor, ever so slightly but crucially so.

Drummer Keith Moon's kick drum resonates in its own way on "Amazing Journey" as does bassist John Entwistle's instrument throughout, giving a depth to the sound of the band that increases as layered textures like acoustic guitars and keyboards appear to mirror the dense conceptual themes interwoven in the story of the 'Deaf Dumb and Blind Boy.' And the span of the stereo spectrum sounds magnified during "Underture."

Since the sound quality of The Live Bootleg Album suffers in comparison to that of the recording included in the "Deluxe Edition" of Live At Leeds (UMG, 2001) these various Tommy titles-only a more discerning selection of which concert renditions might accurately render the development of The Who's breakthrough project-ultimately beg the question of the comprehensive nature of the Who's archiving and what similarly contradictory compilations that initiative will take in the future.

Such an analytical approach may seem in conflict with the combustible impact of the Who, but it's that conflict, rooted in the intellectualism Townshend brought to the band's greatest work (see the Lifehouse project that begat Who's Next (MCA, 1971) as well as Quadrophenia (MCA, 1973), that makes hearing them such a stimulating experience almost five decades after the release of Tommy.