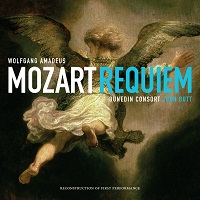 Bruce Haynes, in his book The End of Early Music: A Period Performer's History of Music for the Twenty-First Century (Oxford University Press, 2007) states:

"More than anything else, Authenticity seems to be a statement of intent. Totally accurate historic performance is probably impossible to achieve. To know it has been achieved is certainly impossible. But that isn't the goal. What produces interesting results is the attempt to be historically accurate, that is, authentic."

John Butt, director of the Dunedin Consort, doesn't simply take these words to heart...he takes them fully for granted. He has taken "Historically-Informed Performance" beyond the use of period instruments coupled with academically-rigorous period performance practice to the point of pondering how a specific work sounded during a specific (historically determined) performance on a specific date long ago. In his recording of Handel's Messiah (Linn Records, 2006), Butt endeavored to recreate the April 13, 1742 Dublin debut of the piece under Handel's direction, making a raging flood of educated guesses regarding the vocal and instrumental forces used coupled with existing scholarship regarding key, time, tempi and arrangement.

Butt has now moved beyond the realm of the Baroque into the Classical, wondering what Mozart's Requiem sounded like when performed at what has been thought to be its premiere December 14, 1793 at a church in Weiner Neustadt at a Mass honoring the deceased wife of Franz Count von Walsegg (who originally commissioned the piece). However the first performance of the Requiem in Franz Sussmayr's completion had already been presented in Vienna as part of a benefit concert for Mozart's widow Constanze...well, at least the first formal presentation.

After much academic hand-waving, Butt concludes that this performance employed a chorus of sixteen, with soloists in each of the vocal categories: soprano, alto, tenor, bass. An added feature was that the soloists sang with the chorus rather than separated from it. Butt believes the orchestral makeup to be generous with six violins to a part and slightly less for the lower strings. And so Butt proceeds to perform the Sussmayr completion of the work.

The results are overwhelming. So great are the recording advances since the dawn of the period instrument movement, that the warmth and grace of gut strings can escape the original tinny sonic confines and be adequately captured spatially. So crisp and immediate are the sonics and performance that the Requiem aeternam is nearly terrifying. Butt captures Mozart's fully- realized gravitas in such densely bright colors that the piece breathes with gale force. The much fussed-over Lacrimosa is brought to vibrant and pulsating life as is the stately Sanctus. The closing Cum Sanctis is swirling emotion and pathos. The performance is available as a hybrid SACD and a variety of lossless digital formats.

Butt does not leave his speculation at the end of this superb recorded performance, rather, he turns his consideration to what the completed parts of the piece would have sounded like played at the composer's funeral (as several sources have indicated) on December 10, 1791, five days following Mozart's death. He immediately assumes that the vocal and instrumental forces would have been considerably less, perhaps half used at the December 14, 1793 performance. Thus, Butt makes these adjustments and presents the Requiem aeternam and Kyrie with this reduced firepower to a more intimate and close effect. He also adds to the program the composer's Misericordias Domini in D minor, K. 222 (Offertorium de tempore"), a piece Butt uses to make assumptions.

First World exercises like this remind us that indeed we are lesser angels and as such can only guess at the Divine. Such projects often reveal previously hidden charms of a piece of music, charms that exist like a twilight memory, one just out of reach of consciousness, but so close for a time that it is clearly illuminated and understood, if for just a short time.