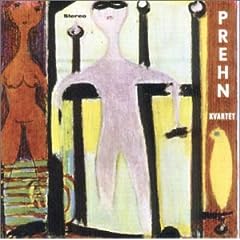 Not generally known as a hotbed for free jazz, the tiny country of Denmark has actually spawned some great music. The single biggest Danish star of modern jazz, alto saxophonist John Tchicai, recorded in a variety of settings with influential American and European improvisers. And the city of Copenhagen hosted some of the most epochal early '60s documents of the free jazz era (eg. Cecil Taylor's Nefertiti. ) In 1967, Danish pianist Tom Prehn entered a Copenhagen studio to create the only extant recording of his working group, the self-titled Tom Prehn Quartet. Originally released in a limited vinyl pressing on the obscure V58 label, the Tom Prehn Quartet finally resurfaces in digital form in 2001, courtesy of Atavistic's Unheard Music Series. The sonics of this recording are surprisingly well-balanced and clear, given the inherent limits of the technology involved.

The ordering of the tunes on this disc allow the listener to gradually step up to the high intensity free energy Prehn's group is capable of releasing. The quartet engages in quick, punchy, jumpy exaltations on the opener, "F. Eks." Each player pounces like a hungry animal on isolated, disjointed shards of sound. Then, on "Modus Vivendi," Prehn delivers simple repeated treble piano clusters which periodically drop off the cliff into a single dissonant bass bomb—leaving the rest of the group to pick up the pieces. Later tunes explore open-ended group improvisation over an extremely wide dynamic range. Tom Prehn Quartet offers a great deal of explosive, surging energy; as well as a handful of spacious, introspective moments.

Tenor player Fritz Krogh often has his hand on the pulse... and when he unleashes the full blistering energy of his instrument, the rest of the group generally follows with crashing, boiling accompaniment. When he lays out or lays back, the other players utilize the opportunity to explore subtler dimensions of melody, tone, and density. The centerpiece of the record, "Forloeb," sounds like an exposition of schizophrenic dual personality: after a initially violent thunderstorm of activity, the clouds subside just long enough for Prehn to proffer a tender, pianissimo piano solo—and then it's back to the pounding, thrusting, and punching all over again.

Prehn's distinctive piano style relies on harmonically dense clusters at every turn. He rarely plays a simple melody line; instead, he harmonizes almost everything at densities that push the limits of tonality. An exceptionally lyrical theme on "L'Homme Armé" offers proof that Prehn can "sing" in the conventional sense, but generally he strays far off the beaten path. And unlike other cluster/energy players, Prehn duly respects a direct, if somewhat irregular, rhythmic organization.

The disc Tom Prehn Quartet has much to offer both as an important historical document as well as a generous demonstration of imaginative, open-ended improvisation. Be warned that the dynamic range on this record is sufficiently broad that in order to hear the details of its most subdued moments, you'll end up blasting holes in the wall when the band goes full-throttle.