By IAN PATTERSON
February 16, 2017
Sign in to view read count 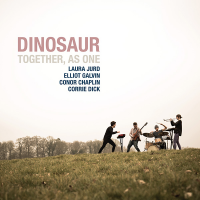 The changing of the band's name and the album title are strong indicators of the quartet's equilibrium. For sure, as founder, composer and producer, Jurd is the driving force, and her potent trumpet playing a key feature of the music; yet Dinosaur is very much the sum of its parts. From the opening motif of the atmospheric "Awakening"—a twenty first century offspring of "In a Silent Way"—Fender Rhodes is inseparable from trumpet on the catchy heads, while Galvin's structured chord progressions, underlying drones and intermittent psychedelic dabs and spacey swirls color the music greatly.

Though Chaplin and Dick provide the group's motor, keyboards and trumpet routinely reinforce the rhythmic thrust of Jurd's compositions. Chaplin's electric bass anchors the quartet with quiet, pervasive authority, alternating seductively between flexible groove and insistent pulse. By way of contrast, Dick's greater stylistic freedom brings an unpredictable edge to through-composed material that, whilst firmly rooted in the broad jazz tradition, reflects Jurd's fluency in contemporary classical and folkloric idioms. A little of all these ingredients come together on "Robin," where the jaunty, quintessentially English intro precedes an alluring Jurd solo that suavely blurs the lines between classical élan and jazz bravura.

In the main, however, Dinosaur roars when sinking its teeth into meatier fare. The infectious, slow grooves of "Extinct" steer the quartet, while in the mid-section contrast and tension is fuelled between Galvin's dark Hammond waves and Jurd's more melodically defined lines, plus her inclination to embrace space. The roles are reversed in the tail, as Jurd takes one of her most extended, and compelling, solos of the set.

The punchy "Primordial" seems to pick up where "Extinct" left off, as though Jurd had some unfinished business. When Jurd sits out, bass, drums and keyboards elope in unbridled freedom like sprinters, fiercely focused in different lanes yet heading towards the same goal. As the finishing line approaches Jurd returns, and the quartet, in slow motion, bunches up, trumpet and keys breaking the tape in a photo finish. The three-minute "Interlude" brings the quartet back down gently to earth, though even in this atmospheric vignette, there's plenty to capture the ear.

Jurd's accomplished writing matched with vibrant collective play makes for a potent, highly satisfying brew. The quartet has been around for seven years but this could be the record to launch it internationally. Miles, you feel, would almost certainly approve.

Title: Together, As One | Year Released: 2017 | Record Label: Edition Records