John Medeski & Lee Shaw: Together Again: Live At The Egg

By Bruce Lindsay
February 15, 2011
Sign in to view read count 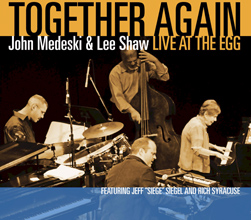 John Medeski is one of the jazz world's best-known and most accomplished keyboard players—but he had to begin learning jazz somewhere. That somewhere was with pianist, composer and teacher Lee Shaw, in late '70s Fort Lauderdale, Florida. Over 30 years later, as the title of their album makes plain, Medeski and Shaw are Together Again: Live At The Egg on a joyously musical date from the Albany, New York venue recorded on April 5, 2009. It's a date made possible by bassist Rich Syracuse and drummer Jeff "Siege" Siegel, who deserve special thanks for organizing the gig.

Shaw moved to Albany in the '80s and with husband Stan she became a stalwart of the jazz scene, accompanying top players such as Dexter Gordon and Zoot Sims. She's now in her mid-80s—a fact, but not one which is at all apparent from the vivacity and creativity of her playing. Shaw is in fine form—her playing is expressive and dexterous, whether she's putting together a funky groove on Medeski's "Wiggly's Way;" from Medeski Martin & Wood's It's A Jungle In Here (Gramavision, 1993); or weaving light, crystalline, flurries of notes as she duets with her ex-pupil on her own "Holiday."

Much of the power and drive of this music is due to the excellent rhythm playing of Syracuse and Siegel. Their introductory duet on the sparky, feel-good "Holiday" is the most obvious example of this with its tight, swinging groove. There's plenty more where that came from, though: the two men have been members of Shaw's trio for many years and they trade off each other's playing with great verve.

Medeski's own solo piece—entitled, with uncanny accuracy, "Solo Piano Piece"—is a terrific display of his command of rhythm as well as melody. The performance is dynamic, the sound rich and full as he moves through passages of hard-hitting chordal playing to phrases of subtlety and delicacy and back again.

Medeski moves over to Hammond B3 on a couple of tunes, including Shaw's "Tears." Shaw takes the lead on this mournful duet, with Medeski using the Hammond to build on the atmosphere she creates on piano. He stays with the organ for "Blues 11," another Shaw composition, adding a bluesy solo to the tune which also features Syracuse's excellent bass solo. For "Prairie Child" Medeski moves over to the melodica, combining with Siegel and Syracuse to add some humorous touches to Shaw's Gallic-tinged and cheerful tune.

The interplay between all four musicians on "Lizards" is almost telepathic—the tune is an improvisation, harking back to the days when Shaw would teach the young Medeski by asking him to describe the movements of these creatures through his playing. It serves to display the abilities of all four musicians, and the obvious mutual respect they have for each other. Together Again: Live At The Egg showcases a wonderful evening of music—the first recording to combine these formidable talents, but hopefully not the last.