Sri Hanuraga: To The Universe 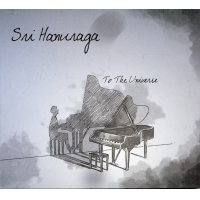 Pianist Sri Hanuraga is another amazing young talent from Indonesia. To The Universe is his debut album as a leader, though he's previously recorded with the young Polish vibraphonist Dominik Bukowski and Indonesian bassist Kevin Yosua. Recorded in Amsterdam with a European band, Hanuraga nevertheless draws quite heavily on the music of his native land for inspiration. The result is a consistently engaging synthesis of modern jazz and ethnic Indonesian music, with a little bit of progressive fusion thrown in.

In fact, Hanuraga—also known as Aga—cites the music of Keith Emerson as the inspiration behind his decision to quit the guitar and take up the piano as a youngster. Probing further into Emerson's influences, Aga learned of the prog-rocker's passion for jazz. Investigating further, Aga encountered the jazz scene in his own country via the music of Indra Lesmana and simakDialog. Aga later studied jazz piano formally with Lesmana, and eventually went on to study jazz piano performance at the Conservatorium van Amsterdam; winning several awards and graduating with honors in 2011.

Though the music on To The Universe has a very strong Indonesian influence—it's not hard to imagine some of these pieces being played by a gamelan orchestra—it's a jazz album through and through. The more dynamic up-tempo pieces such as "Gundul Pacul" and "Ever Changing, Part 3" have a truly magnetic appeal. "Gundul Pacul," with its acoustic prog rock feel, is the heaviest track on the album. Aga's solo over throbbing bass and drums is full of tricky runs, odd harmonies and interesting spaces. "Ever Changing, Part 3" is a surprising and highly appealing foray into high-energy electric fusion, replete with ring-modulated Rhodes, fuzz bass and slap-happy drums. Unfortunately it's the only track of this sort on the album. The trio strays farthest from the Indonesian folk influence on the album's first and last tracks. "Teka Teki," based on a series of slightly dissonant stabs, has the restless feel of JoAnne Brackeen's outside / inside free-bop work from the late 70s and early 80s. "Schoenefeld" is a breezy hard bop piece that wouldn't sound out of place on one of Herbie Hancock's Blue Note albums from the 60s.

Though some of Hanuraga's slower tempo pieces such as "A Palm for You" and the first two parts of "Ever Changing" almost totter on the brink of treacly sentiment (fortunately, none of them falls in!), the title track is redeemed (so to speak) by its more blues-based sound. Far more engaging are "Suwe Ora Jamu" and "Amadeus," both of which investigate Indonesian roots music using a more playful and adventurous approach. Aga stretches out for an impressive unaccompanied solo on "Suwe Ora Jamu," and manages to turn up the intensity further when joined in a 6/8 romp by bass and drums. "Amadeus," as its name suggests, riffs around with some Mozart-inspired motifs viewed through a Jakartan lens.