Kathy Kosins: To the Ladies of Cool 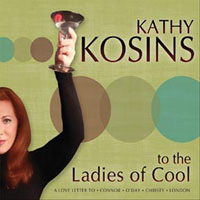 Singers June Christy, Chris Connor, Anita O'Day and Julie London were prominent in the 1940s and '50s. Christy, O'Day and Connor all spent time with Stan Kenton's band, while the sultry London became a pinup as well as a big record seller. Popular with both jazz and pop fans, these singers could regularly be heard on 78s and radio, singing the siren call for the emerging West Coast cool sound. With her fifth album, To the Ladies of Cool, singer Kathy Kosins does a terrific job honoring these four greats with her honey-coated voice.

Hailing from Detroit, Kosins has a long list of credentials as singer, composer and arranger. She grew up immersed in the city's jazz and R&B scenes and started out performing soul, rock, and funk, switching to jazz some 15 years ago, now combining gigs with a teaching career. Her style is sophisticated yet natural, torchy but breezy.

Kosins went to Los Angeles to record in the stomping grounds of her four honorees, selecting tunes from their repertoires. Among the titles, some are well-known, others she had never heard before. Overall, the session is a big success and much is owed to pianist Tamir Hendelman, who did the arrangements and contributes superb backup and solos. The rest of her band also deserves praise.

Obvious from the get-go, Kosins does her own thing. On "Learnin' the Blues," she abandons London's dreamy, sexy softness for a harder-edged bluesy defiance. With "All I Need is You," from Connor's songbook, Kosins again goes against the grain, distilling Connor's cool, compressed emotionality into a lightly swinging brew. O'Day's wordless vocalese on "Hershey's Kisses" gives way to Kosins' witty lyrics, giving voice to a lighthearted rhythmic romp where the singer joins the horns for some catchy harmony à la O'Day. Kosins pays homage to Christy, long associated with "Lullaby in Rhythm," on an up-tempo scat version, where Hendelman and guitarist Graham Dechter share solo space wonderfully, with saxophonist Steve Wilkerson solidly pushing the song to its finish. The CD ends exceptionally with Kosins' wistful bossa nova treatment of "Where Are You?"

Raise the glass and here's a toast. With To the Ladies of Cool, four standout vocal pioneers are deservedly celebrated.

Learnin'the Blues; Nightbird; Don't Wait Up For Me; All I Need Is You; Free and Easy; Hershey's Kisses; Lullaby In Rhythm; November Twilight; Kissing Bug; Where Are You?