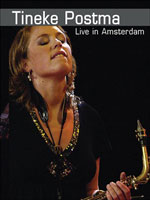 If you've ever wanted to watch a jazz show on the set of Blade Runner, the Bimhuis club in Amsterdam is just the place. All its ambiance—from the wall of windows with louvered blinds behind the stage, through the trains passing on elevated tracks, to the lighting that looks like artificial sunlight—is captured on Live In Amsterdam, the new concert DVD from Dutch saxophonist Tineke Postma.

Postma began playing the saxophone in her native Holland aged just nine. She received a Masters degree from the Conservatory of Amsterdam in 2003, and then studied at the Manhattan School of Music with David Liebman and Chris Potter. In an interview on the DVD, Postma says that she didn't listen to much pop music as a kid—just a little Phil Collins, Sade and Sting. And that's exactly the vibe her music gives off—Collins on his solo albums or Sting after The Police. Often engaging, always pleasant, but seldom edgy or challenging.

The performance, from August 2005, is well filmed. The picture is clear, and the camera operators focus on the soloists, with plenty of close-ups of their hands. The sound mix is generally good, although there are some strange drops in the volume at several points, most notably during "Firenze."

The music is very easygoing, with some moments that nudge above that—notably Postma's soprano saxophone introductions to "Summersong" and her alto work on Gordon Jenkins' "Goodbye;" the solo by guest trombonist Ilja Reijngoud on "Firenze;" and the interplay of the rhythm section, each member of which is a bandleader in his own right.

Most of the show, though, is played at medium tempo, and there are few times when anyone seems to really be reaching beyond their comfort level. No missed notes, no moments when you catch your breath to see what will happen next.

Postma writes some engaging melodies, and she and her band are unquestionably skilled at their craft, but Live In Amsterdam seldom hits the emotional peaks that mark the best concert recordings.

Tracks: Summersong; Comprehension; Joe's Tune; Song For Sea-Tee; Firenze; Goodbye; Ballad For Dado; Pump It Up; For The Rhythm.