By Dave Nathan
November 1, 2001
Sign in to view read count 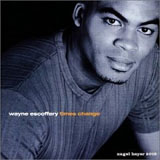 This is London native Wayne Escoffery's first entry on the Nagel Heyer label. Rather than going with a crowded program, the saxophonist opted for eight tunes leaving him enough time on this hour plus album to examine and probe possibilities and opportunities to create a special listening adventure. The short answer to whether he accomplished that objective is "yes."

It helped to include tunes written by masters of free and creative jazz as Yusef Lateef ("Water Pistol") and Sam Rivers ("Beatrice"). It also helped to have studied at one of the country's most forward looking jazz programs, Jackie McLean's Hartt School. His time was not wasted there as he respects what each tune has to give in terms of emotion, musical ideas and harmonic texture. On Jobim's lovely "Triste," Escoffery and cohorts state the melody, than go down a variety improvisational paths, effectively using one of music's oldest techniques, repetition to good effect, before revisiting the melody more than seven minutes later.

There's some straight from the hip hard bop on the kick off track, an Escoffery composed "Come Back Lucky," a tribute to the great and tragic Lucky Thompson. One aspect of Escoffery's playing setting him apart from saxophonists of his generation is his tone. Although he is playing creative jazz, he avoids the shrillness of sound that many believe has to be part and parcel of that style.

If this album is any indication, Escoffery knows that music is supposed to give pleasure, not give one a headache.