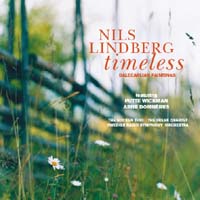 Nils Lindberg has apparently spent his lengthy career recording some pretty good jazz-meets-ancient-folk which you've never heard. His 2003 Christmas album hit the market in January of 2004 and is now out of print. Some of his used albums sell for more than $100 each, though a few more reasonably priced releases are available on the internet.

But it's now possible to hear a compilation of the Swedish musician's 1970s work with the newly released Timeless: Seven Dalecarlian Paintings. The album is hardly dated, however—its sound and creativity easily pass for contemporary. Much like the medieval Swedish folklore the compositions are based on, it's thoroughly pleasant without a tome-like depth.

The linear notes describe the pianist as "A modern curbitz painter," explaining that the curbitzes were naivists who staged plays about the bible in villages, using the clothes on their backs and whatever the neighbors might have available. With Lindberg, whose family in the Swedish province of Dalecarlia has a long musicial history, "the folklore is the basic element, the strokes of his musical brush mirror the present time."

The liner notes conclude by stating "one of tempted to label these Lindberg adaptations as Swedish blues," but that isn't entirely accurate. The material seems more like a mingling of pops classical, soundtrack, folk and little big band. There's both variety and sameness to the songs—the styles may be different, but all the tracks are highly melodic pieces that tend to wrap the listener in the ensemble, rather than individual instrumentation.

The heavy ensembles are stripped away a couple of times. Lindberg plays the hymn "The Blessed Day" on pipe organ and concludes the album with a solo piano treatment of "Song From Djura." The latter is more appreciable, with enough space to allow him to switch between (mostly) light and (sometimes) heavy touches with clarity.

If Timeless is a feeler by Prophone to determine if Lindberg's works are worthy of reissue, the answer is probably yes. There's a lot of intrigue here, although it would be nice to hear some of the concepts explored in greater depth. Based on this recording, many listeners will likely be curious to hear how he's developed since the 1970s.