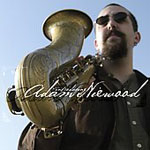 Though Adam Niewood's 2004 debut recording may have been late in coming, it showcases the immense voice of this little-known but rising musician. The New York saxophonist is the son of musical parents, jazz saxophonist Gerry Niewood and classical pianist Gurly Niewood. But he may be better known for his expertise as a woodwind mouthpiece refinisher, restoring the life of worn and battered mouthpieces to rejuvenated quality.

That craftsmanship and attention to detail is also evident in his music. Niewood has a distinctly powerful, supple and soulfully intelligent presence. One can draw comparisons with several jazz saxophonists, but Niewood never mimics or rehashes someone else's work. He clearly can hold his own with names like Tony Malaby, Chris Potter and other notable contemporaries.

Like many debuts, Introducing showcases Niewood's exploits in both old and new territory, joined by a talented and bright band. Like sound in virtual motion, the music flows through various movements. "Shorty's Shuffle" features a rocking rhythmic swing and a layered reed section (with some help from Gerry Niewood on bass clarinet and alto flute), where Adam solos with calm perfection on soprano sax. The satin urban vibe of "Philly Groove" glides in next with soulful overtones, elevated by Eric Lewis' dynamic and uplifting piano.

Niewood is also a man of many sounds. His tenor has a balmy luster on the cover of the Beatles' "And I Love Her" and an angular resonance on Wayne Shorter's Weather Report classic "Pinnochio, propelled by the exacting cadence of bassist Matt Brewer and drummer Ben Perowsky. Niewood's playing on "Wayne's World is stunning as his solo builds in strength, stamina and passion.

The band takes the listener to Sunday service on "Kate Marie, with gospel piano and choir-like balladry, or down the hard bop memory lane of 52nd Street, on "Heard that Before. But Niewood also has his pulse in the present on pieces like "Hopscotch and "Nervous Brunch, both of which begin with simple patterns but yield complex inner workings.

Introducing Adam Niewood is more than just a run-of-the-mill saxophone debut. The music speaks for itself, and it'll be quite interesting to hear what Niewood delivers next.