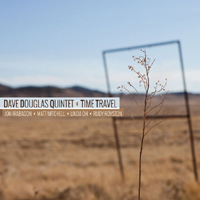 Time Travel is the follow-up to 2012's Be Still, the critically acclaimed debut of trumpeter Dave Douglas' new Quintet. Since co-founding Greenleaf Records with label manager Michael Friedman in 2005, Douglas has issued a number of eclectic projects on the imprint, but few have been as surprising as last year's release, which featured folk singer Aoife O'Donovan. Dedicated to his late mother, the elegiac album was comprised of contemplative spirituals—an acquired taste for fans of Douglas' adventurous post-bop, since O'Donovan's Americana-styled vocals dominated the session, leaving the instrumentalists to play second fiddle.

The date consists of several evocative examples of Douglas' highly distinctive writing, veering from the tortuous urban bustle of "Garden State" to the spare pastoral vistas of "The Pigeon and the Pie." Throughout the expansive set, Oh and Royston navigate Douglas' exigent but accessible structures with spirited aplomb, underscoring Mitchell's cascading filigrees and the horn players' interweaving lines with an intuitive ebb and flow that balances strength with sophistication.

Unconstrained by thematic concerns, Douglas demonstrates his all-encompassing aesthetic, revealing a broad capacity for expressionism. He elicits bold, brassy salvos in the old-fashioned swinger "Beware of Doug," instills an air of impressionistic abstraction to the enigmatic opus "Little Feet," and conveys solemn beauty on "Law Of Historical Memory" through a series of affecting refrains.

Irabagon, however, nearly steals the show. A prodigiously talented master of extended techniques, his chameleonic dexterity bolsters the proceedings with impetuous flair. He seamlessly integrates intervallic multiphonics into the shifting changes of "Bridge to Nowhere," crafts nervy staccato variations from the title track's elliptical rhythms, and shows lyrical restraint on the brooding "Law Of Historical Memory."

Featuring some of today's brightest new stars, the current incarnation of Douglas' Quintet reflects the independent spirit of a pioneering artist whose intrepid enthusiasm manifests itself in his choice of gifted young collaborators. Lending credence to its title, Time Travel displays the boundless creativity of a group that derives equal inspiration from both past and future.