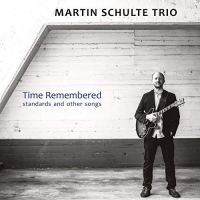 German jazz guitarist Martin Schulte's previous album Walking Distance (Laika-Records, 2016) was a quartet (sometimes quintet) recording of Schulte's compositions. Here the instrumentation is stripped back to a solid trio with bassist Henning Gailing and drummer Jens Düppe, and as the subtitle would have it, the program is mostly standards (although Schulte sneaks in three of his own tunes). The guitarist sticks to a clean sound throughout, so it is a mainstream program in most ways.

The title tune belongs to pianist Bill Evans, and it opens the set on a contemplative note. Schulte's first original, "Where We Belong," is a deliberate, lyrical piece played chord-melody style—in some ways a more traditional sound than the standards. Saxophonist John Coltrane's "26-2" is the bebop entry, a brisk, refreshing contrast. "Darn That Dream" finds Schulte playing an unaccompanied introduction and first chorus, an approach he also takes for "I'll Be Seeing You." If this album turns out to be his only attempt at playing standards, it clearly establishes his rapport with them.

The original "This Way" displays the filename (likely a working title) "Pedal Song," which certainly describes the pedal tone underlying the structure of the first part of the head. The remaining original "Junk in The Trunk" has the most contemporary sound in the set, a funk tune reminiscent of guitarist John Scofield (although Schulte still refrains from using overdrive). Closer "I Fall In Love Too Easily" (from the pen of Jule Styne) is a lovely feature for bassist Gailing, who plays the head and is the lead voice for much of the track. The leader takes a mostly accompanying role, limiting himself to a brief guitar solo. A fine ending to a most enjoyable jazz guitar trio session.

Time Remembered; All or Nothing at All; Where We Belong; 26-2; Darn That Dream; This Way; Junk in the Trunk; I'll Be Seeing You; I Fall in Love Too Easily.