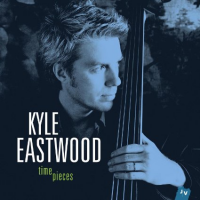 Double bassist, composer and producer Kyle Eastwood unveils a timeless treasure with his seventh album as leader on the sensational Time Pieces, capturing the mood and aura of the 50s and 60s jazz scene blending two standards from the era with rich new compositions incorporating the sensitivities and flavor of that time period. It has been seventeen years since his debut album and along the way, Eastwood also enjoys working on film music where he has composed and arranged scores for his famous father Clint Eastwood's Oscar nominated films "Mystic River," "Million Dollar Baby," and "Letters from Iwo Jima," which is reprised here with a scaled down version arranged for piano and bass.

On this album, Eastwood—who performs here on the electric, acoustic and fretless bass—returns to his jazz roots and influences as he includes music from some of his favorite jazz musicians notably, Horace Silver and Herbie Hancock and admits that much of the originals on this recording, are infused with elements of such influences. The bassist ventures into the modern jazz territory on a ten-piece repertoire where, with the exception of the light melancholy original "Vista,' the brief duet with pianist Andrew McCormack on "Letters from Iwo Jima," and the humbling "Nostalgique," he leads a working quintet of young English musicians in documenting a vibrant session of powerful swinging sounds.

The clock starts ticking on the imaginative and funky original "Caipirinha" featuring the leader on the electric bass, the trumpet voice of Quentin Collins and sharp solos from saxophonist Brandon Allen as the band opens in impressive style. The Silver standard "Blowin' the Blues Away" is s burner of a tune capturing more hard-driving grooves from both the trumpeter and saxophonist but this time, also brings pianist McCormack and Eastwood to the fore with a terrific solo moments supported by strong stick work by drummer Ernesto Simpson.

Eastwood introduces the mid-tempo Hancock tune "Dolphin Dance" arranged with a light texture to it also features horn man Collins on a graceful flugelhorn dance that marks the piece which is followed by the perky grooves of the Eastwood/McCormack original "Prosecco Smile." Dedicated to the late Horace Silver—who passed away during the recording of the project—"Peace of Silver" is another powerful number featuring pronounced solos from Collins on the horn, while the sensual "Incantation," as the press sheet states "finds a direct heart line to the lyricism of Wayne Shorter."

Closing out the set as it began, Eastwood and band perform another high-octane number with the energetic and electrifying "Bullet Train" featuring torrid solos from Allen on the soprano, Collins on the trumpet, a piano foray from McCormack, splashing cymbal accents by Simpson and firm steady lines by the leader on the acoustic bass—all making for one dramatic clock-stopping exit. There's no question about this one, Kyle Eastwood's outstanding Time Pieces succeeds in delivering a measure of swing, swagger and grace in a musical package that's perfect for any time.