Adam Rogers: Time and the Infinite 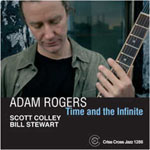 While Adam Rogers is no stranger to the standards songbook, the guitarist's three releases as a leader have focused almost entirely on his challenging yet accessible compositions. They've also utilized the same personnel. Art of the Invisible (Criss Cross, 2001) introduced a guitar/piano/bass/drums quartet that would, with the addition of saxophone, flesh out to a consistent quintet for Allegory (Criss Cross, 2002) and Apparitions (Criss Cross, 2005).

Time and the Infinite pares things back to a trio, and while there are still four Rogers compositions, the majority of the disc is focused on workouts of standards from Cole Porter, Charlie Parker, George Gershwin and others. But anyone who knows Rogers knows that even the most well-worn tune is going to be approached with invention. While Rogers never loses site of the core of tunes like "Night and Day" and "I Loves You Porgy," his re-harmonization and addition of metric complexities keep them modern and relevant.

Bassist Scott Colley is back, but for this date Rogers has recruited drummer Bill Stewart—one of the most melodic and flexible drummers on the contemporary scene. It's a winning combination that allows for the fiery burn of "Night and Day," where Rogers adds an additional 3/4 bar to lend some tension, and a knotty ending vamp that provides Stewart with a challenging foundation for his solo. The requisite swing of Charlie Parker's "Cheryl" is placed slightly off-kilter by making it a thirteen-bar blues, while the bossa approach of the Vincent Youmans classic "Without a Song" is more straightforward, relying instead on Rogers' focused sense of solo construction to create an ongoing sense of tension and release.

The greater responsibility of being the only chordal instrument is no problem for Rogers. His solos adhere to the changes either through the inherent implication of melodic development or through interjection of chordal movement while building detailed and often remarkably deft linear phrases. For the most part Rogers relies on a warm hollow body electric tone, though he adds some textural diversity with a nylon string acoustic guitar on the standard "Young and Foolish" and his own Latin-tinged "Esteban" and title track.

Rogers' own compositions, while distinguished by more adventuresome constructs, remain in context through the modernization he applies to the standards surrounding them. The title track is a through-composed piece that begins in Ralph Towner territory, but ultimately opens into a more abstract middle section with Colley's beautiful arco delivering the spare but lengthy melody. "Ides of March" is even more intricate, all the more remarkable for the trio's uncanny and natural ability to navigate through it.

Rogers' previous Criss Cross releases have demonstrated significant growth. The change in context of Time and the Infinite, with its mix of original composition and fresh takes on familiar tunes, presents a new side to Rogers, but one that's totally consistent with his existing body of work.

Night and Day; Elegy; Time and the Infinite; Young and Foolish; Cheryl; Esteban; Without a Song; Ides of March; I Loves You Porgy.