The Bad Plus: Prog 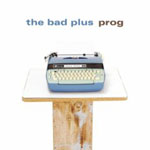 Free from the confines of major label machinery, The Bad Plus returns to its independent roots fully rejuvenated with Prog, its fifth studio album and first on its own Do The Math imprint (distributed by Heads Up). Although a three-album tenure on Columbia Records brought The Bad Plus far greater recognition than its self-titled 2001 debut on the indie label Fresh Sound, it also seemed to gradually sap the trio of its vivaciousness.

What was once a mark of distinction has become ubiquitous, as numerous jazz artists now mine the same contemporary pop landscape for inspiration. More than just masterful improvisers with a penchant for recasting unlikely populist material into ripe frameworks for improvisation, The Bad Plus delivers some of its finest writing to date. The infectious originals (mostly penned by bassist Reid Anderson) easily hold their own to the selected cover tunes, no easy feat considering their iconoclastic nature.

Drawn from an array of authors, including Tears For Fears, David Bowie, Rush and Burt Bacharach, these covers all share a common denominator in piano-based melodies. The group's previous cover choices, by artists such as Black Sabbath, Nirvana and The Pixies, were predominantly guitar-based compositions. Focusing on piano-driven tunes, the trio digs deeper, securing a tangible connection with the material, no matter how far out they take it.

"Everybody Wants To Rule The World" retains its bittersweet optimism, with subtly surprising interjections peppering the singular theme. David Bowie's glam anthem "Life On Mars" is given a fittingly grandiose reading, swelling from gallant introspection to dizzying climax. "Tom Sawyer" marches past familiar riffs into frenetic territory. The most traditional inclusion, "This Guy's In Love With You," is elastically deconstructed through witty call-and-response variations and tight interplay, without ever leaving the core melody behind.

The originals are equally rewarding. "Giant" is a handsome melody, accented by a contagious bass motif and nuanced group interaction. The pulverizing epic, "Physical Cities," alternates supple melodic variations with kinetic riffing and throttling bombast, delivered with an intensity absent from the trio's last long-player. "The World Is The Same" spirals from a restrained, haunting theme into an apocalyptic whirlwind and back again. "Thriftstore Jewelry" is a jittery blast of Latin rhythms and jubilant playing, mirrored by the manic barrelhouse sprint of the exuberant set closer, "1980 World Champion."

Coming into their own as both deft interpreters and singular writers, the members of The Bad Plus stand tall among their peers. With muscular conviction and steely focus, Prog is the sound of a much heralded ensemble rising to the occasion and fulfilling the hype.

Everybody Wants To Rule The World; Physical Cities; Life On Mars; Mint; Giant; Thriftstore Jewelry; Tom Sawyer; This Guy's In Love With You; The World is The Same; 1980 World Champion.