By Troy Collins
February 21, 2014
Sign in to view read count 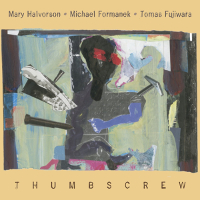 Thumbscrew is the self-titled debut of a two-year-old trio featuring guitarist Mary Halvorson, bassist Michael Formanek and drummer Tomas Fujiwara. As leading members of the next generation, Halvorson and Fujiwara have honed their finely-tuned rapport in numerous ensembles over the years, including cornetist Taylor Ho Bynum's flagship sextet, where they first met Formanek, who subbed for the group briefly in 2011.

Formanek's storied career dates back to the '80s, when he worked as a sideman for such luminaries as Stan Getz, Joe Henderson and Freddie Hubbard. The bassist's longstanding relationship with saxophonist Tim Berne in the ensuing decades established Formanek as a key member of the then nascent Downtown NYC scene. Formanek's recent efforts for ECM Records have received well-deserved acclaim, significantly raising his profile in the mainstream jazz press, which subsequently imparts an air of authority to his role here as seasoned veteran. His commanding tone, bold melodic extrapolations and oblique but steadfast phrasing provides the trio with a reliable foundation for even their most outré excursions.

Although freewheeling improvisational detours abound, the project is primarily composition driven, with each member contributing an equal number of pieces. Complimentary in their aesthetic approach, each work was specifically conceived for this lineup, instilling stylistic cohesiveness to the proceedings. Therefore, one can easily identify Fujiwara's muscular anthem "Cheap Knock Off" as a sly nod to Formanek's angular writing. Behind the trap set, Fujiwara typically eschews percussive pyrotechnics, conveying forward momentum to complex time signatures through tastefully modulated accents and interpolations—a nuanced technique that parallels his compositional subtlety, further revealed by the endlessly shifting tempo changes of "Goddess Sparkle."

Despite mirroring the instrumentation of Halvorson's own trio, Thumbscrew explores similar thematic territory with a greater dynamic range and a concerted focus on collective improvisation. A magnanimous collaborator, Halvorson's urbane compositions tend to favor the rhythm section's supple interactions in this intimate setting, as demonstrated by the conversational exchanges of "Fluid Hills In Pink." Left to her own devices however, Halvorson soars unconstrained, especially on Formanek's thorny tunes, which allow the guitarist ample freedom. On the bassist's "Buzzard's Breath" and "Still...Doesn't Swing," Halvorson unleashes riveting cadences that gracefully build from sinuous arpeggios to metallic clusters, climaxing with a torrent of psychedelic tremolos on the latter number.

Balancing sophisticated writing with adroit improvisational interplay, Thumbscrew is a captivating document of the harmonious chemistry shared by three master musicians. Following in the footsteps of recent releases from vanguard artists like Living By Lanterns, Rob Mazurek and Jason Robinson, Cuneiform Records continues to issue some of the most compelling modern jazz of our time.