Harutaka Mochizuki: Through The Glass 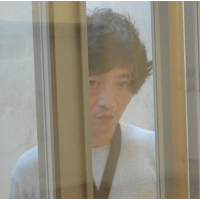 Harutaka Mochizuki is a multi-instrumentalist who dedicates a significant part of his output to solo saxophone performances, following a long tradition of Japanese experimental improvisers that, from Kaoru Abe onward, has investigated this particular musical environment with uncompromising rigour.

In Through The Glass, Mochizuki confronts this tradition with a very personal voice, distancing himself from the style of Abe, whose influence was evident in previous records, while further developing some of his distinctive traits — like the preference for the altissimo register and a sort of sculptural phrasing made of short, incisive statements. The album is divided in two parts, that together compose a sort of investigation on the emergence of a musical language from silence.

The first part is an exploration of the saxophone's potential as a sound producing device, more than a traditional musical instrument. The language of jazz is still present, but is reduced to its primary components, within a cyclical structure that follows the same pattern: from silence, to barely audible whispers, then fully formed sounds that are either reiterated or developed in minimal phrases that disappear the moment they emerge. The resulting soundscape has an almost hypnotizing effect, building tension by focusing, or rather obsessing, on the fragile limits of sound production; an enigmatic progression eventually interrupted by the sound of a breaking glass—a simple dramatic device that actually works well in this context, a transparent metaphor for Mochizuki's iconoclastic style.

The second part has a slightly more traditional character, with longer phrases and more precise contours, while keeping the same overall configuration of the previous one, characterized by slow structural developments and pianissimo dynamics. The different aspects of the performance are magnified by a patient work on microdynamics and carefully delineated sonic details, as if Mochizuki was discovering the nature of timbre and the formation of melody for the first time, following a mysterious logic that keeps the music in an unresolved, oddly captivating dimension until the very end.