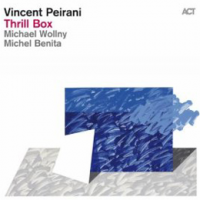 Thrill Box is Vincent Peirani's debut release on the ACT Music label. Its title refers to Peirani's instrument of choice, the accordion. For many, the accordion springs most readily to mind as an East European folk instrument, for others it evokes images of Morris dancers on warm English spring evenings (although that's more usually the concertina) or summers at a French pavement cafe, for others still it's part of the musical culture of South America. On this mixture of original tunes, jazz classics and American traditional songs it's all of those things—as well as a front-line jazz instrument.

Peirani started out as a classical music scholar, aged 12 and he's played with stars including fellow ACT Music artists Ulf Wakenius and Youn Sun Nah. His technical mastery of the accordion is impressive enough, but he couples this with a strong sense of humor and of musicality. He opens and closes Thrill Box with stunning solo performances of "Choral" and Joseph Canteloube's "Bailero." Both tunes demand control and precision from the performer: Peirani shows that he has both skills in abundance as well as the maturity required to maximise the tunes' emotional impact.

Things can get a little more upbeat when the accordionist is joined by bassist Michel Benita of Trio Libero and pianist Michael Wollny of [em]. "Upbeat" mustn't be confused with "up-tempo": the characteristic pace of the music remains languid and relaxed, but the mood lightens and a feeling of joy emanates from the players whether they're performing a gentle waltz (Brad Mehldau's "Waltz For JB") or a spiky bebop classic (Thelonious Monk's "I Mean You").

Benita is in masterful form throughout, never playing two notes if one will suffice—and always playing the right one. Wollny complements Peirani's accordion melodies with some delightful melodic phrasing of his own—his playing on "Waltz For JB" is superb—and also adds depth with his rhythmic chordal playing.

Peirani digs deep into the roots of American music with versions of "Goodnight Irene" and "Shenandoah" that bring to the fore the inherent sense of longing at the center of both songs. "Goodnight Irene" is a duet between Benita's bass and Peirani's accordina (a small instrument that resembles a cross between accordion and harmonica): "Shenandoah" is a laid-back trio performance that's as spacious as the American landscape it evokes.

Joy is pretty much unconfined on "3 Temps Pour Michel P," Peirani's tribute to his guest Michel Portal. Portal's bass clarinet adds a rich texture to "B&H": his bandoneon on this tune combines with Peirani's accordion in a duet that's fun, funny and distinctly groovy. Throw in Peirani's enthusiastic vocalisation and the song becomes completely irresistible.

An accordion may not be everyone's idea of a Thrill Box but Peirani does more than enough to justify the album's title and this description of his instrument. The thrills may be more cerebral than visceral, but there are plenty of them—and it seems clear that he's got plenty more to come.