BY JOHN SHARPE
October 1, 2018
Sign in to view read count 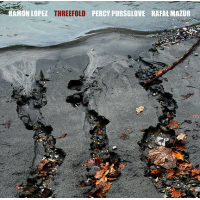 A quick glance at the discography of Spanish drummer Ramon Lopez reveals a musician steeped in diversity, both geographical and stylistic. It's striking that so few of his releases share the same line up, notwithstanding his enduring partnership with pianist Agusti Fernandez. So perhaps it's no surprise that on Threefold he pilots the debut of a multinational trio completed by British trumpeter Percy Pursglove and Polish acoustic bass guitarist Rafal Mazur. The association with Pursglove stems from the involvement of both in Barry Guy's Blue Shroud Band, while this is Mazur's first outing with Lopez, preceding by one day Wandering The Sounds (Fundacja Słuchaj!, 2018), testament to the Spaniard's immersion in the Polish scene.

In this studio session, Lopez mixes four of his own tunes into a program of six collective improvisations. However there's less disparity between the cuts than you might expect due not only to how unprescriptively the charts establish a mood for subsequent exploration but also Pursglove's distinctively melodic sensibility, which means that even the improvisations take on a lyrical cast. Furthermore, Lopez promotes a group ethos which manifests itself through empathetic conversational dialogue, often reflective in approach, with barely a drum solo to be heard.

Of the compositions, "Three Musicians" finds Pursglove's stealthy muted trumpet and Mazur's growling bass sneaking along an introspective course, buffeted by unpredictable percussive accents. The piece opens out for Pursglove, now unmuted, to propose a bright but melancholy-tinged Spanish sounding line over increasingly choppy accompaniment, before reverting to type. "Au Lapin Agile" is full of jagged rhythms and silences, from Lopez' dramatic opening to Pursglove's staccato yet honeyed flare-ups, while on "Bachanal" the drummer integrates tabla into his kit for loping propulsion, abetted by Mazur's on/off riff against which Pursglove unspools slowly blossoming trumpet.