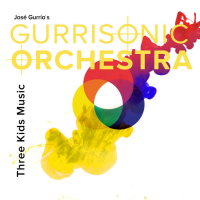 Accompanied by a richly illustrated, full-color 46-page booklet (with notes by Jeff Tamarkin, the Associate Editor of JazzTimes Magazine) and packaged in a lush trifold paper sleeve, Three Kids Music by Jose Gurria and his 21-piece Gurrisonic Orchestra projects a sort of hugeness and importance whose portent is completely fulfilled by the quality of the music therein. In light of all this, it seems ironic, however, that the first track is titled "Constant Deprivation of Monetary Funds (The Beast)." Clearly, some big bucks were involved in the creation of Three Kids Music. Drawing equally on modern jazz, progressive rock, contemporary orchestral music, and the broken, oddly-skewed rhythms that have evolved out of hip-hop (thank you J Dilla), Gurría's music stands as a reconfiguration of what Gunther Schuller termed "Third Stream Music" back in the late 1950s.

With that in mind, it's important to revisit what Schuller said that Third Stream is not: "It is not jazz with strings. It is not jazz played on "classical" instruments. It is not classical music played by jazz players. It is not inserting a bit of Ravel or Schoenberg between be-bop changes— nor the reverse. It is not jazz in fugal form. It is not a fugue played by jazz players. It is not designed to do away with jazz or classical music; it is just another option amongst many for today's creative musicians." These parameters are equally relevant for Gurría's music, which I suspect Schuller would have loved. Another thing that Gurría's music is not is a showcase of his own drumming. In fact, vast swaths of several tracks (e.g., "The Finger," "Three Kids Music," and a significant chunk of "Caballo Viejo") lack percussion entirely. Elsewhere, Gurría utilizes the drum set in a purely orchestral fashion, in much the same way that tympani drums are used in conventional orchestral music. But when it comes time for him to lay down a groove, Gurría is all over it. His playing, elastic and subtly syncopated, swings and yet doesn't struggle against the weight of his own compositional mandates.

There's quite a bit of variety on Three Kids Music, though Gurría seems to favor certain options in his rather large bag of tricks. Improvisations that weave in and out of rhythmically asymmetric repeated staccato figure prominently on "Ishuakara," "Constant Deprivation of Monetary Funds," and "Aqui." On "Oso," Gurría flips the script and frames solos by Eric KM Clark and former Roy Ayers sideman Justo Almario with his own free-ish drumming abetted by some righteous horn and string stabs. This makes for some of the album's most exciting and inspired moments. Daniel Szabo's piano is quite prominent throughout the entire album, and quite rightly so as he seems totally in his element whether he's improvising or playing Gurría's meticulously scored material. "The Finger" is a veritable showcase for Szabo's talents, and he makes the most of it, but not by overplaying or showboating, but by delivering a beautifully-paced, deeply felt performance.

Finally, it's important to note that the strings and vocals on Three Kids Music aren't present as "sweeteners." Rather, both are fully integrated into the ensemble as leading voices and improvising soloists. Solos by violinists Eric KM Clark and whoever is playing on the title track are convincingly within the jazz idiom. Dorian Wood's operatic vocal on "Caballo Viejo" somehow manages to stay within the idiom while being completely compatible with the rhythmically turbulent jazz-centric nature of the orchestra which eventually engulfs him in a Globe Unity-scale maelstrom. Areni Agbabian's voice on the title track and "Ishuakara" is quite the opposite, delicate and horn-like she doubles the melody with the strings and horns.

Three Kids Music is nothing if not ambitious and a bit over-the-top. It's a large scale production that tapped the creative energy of dozens of contributing musicians, writers and artists. The fact that it's executed so well, with such obvious passion is, in itself, rewarding to witness. But, in the end, it's the success of Gurría's music that will make one return to Three Kids Music for a deeper listen.