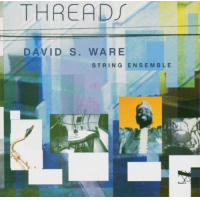 After successfully reinterpreting an untouchable Sonny Rollins classic and blasting into the electronic stratosphere with Corridors and Parallels, tenor sax titan David S. Ware debuts on Thirsty Ear with a string ensemble. His famous quartet returns with William Parker and Guillermo E. Brown as rhythm runners and Matthew Shipp as a sort of one-man string section via a Korg Triton Pro X. Augmenting Shipp in this department are Mat Maneri on viola and Daniel Bernard Roumain on violin.

Maneri continues a longtime association with Shipp, having recorded with the his dad Joe in the Maneri Ensemble and other projects, including sessions with Joe Morris and his own beautiful Thirsty Ear release, Sustain. Many listeners may remember Harlem-based composer and performer Dr. Roumain from his violin interludes on DJ Spooky's Optometry. As a composer he smears musical boundaries with his meld of classical and hip hop.

The only track to include all the musicians, "Ananda Rotation" lets Ware's deep sax and Maneri's viola roam a swelling synth string landscape with occasional gongs and cymbals and Parker plowing a deep row. "Sufic Passages" sounds like an outtake from Chico Freeman's Streetdancer band. With Shipp doubling Parker's bass line using a piano sound, Maneri and DBR lurk with sustained tones until they cut loose with entwining improvised duets.

Fans of Ware's burly tone and powerful inventive playing will curse his absence on three of the six tracks. Console yourself with his writing and arranging for this configuration, which testifies to his relentless growth and exploration.