Keith Oxman: This One's for Joey 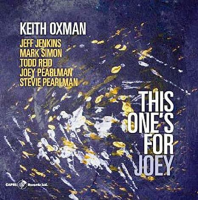 The "Joey" saluted on Denver-based tenor saxophonist Keith Oxman's latest album is Joey Pearlman, a jazz bassist who died far too soon, at age twenty-four, in Febuary 2021. Joey's "music and personality," Oxman writes, "brightened every day for us at [Denver's] East High School. His presence brought joy to our music room...as he challenged us with his brilliant compositions and performances. Joey's musical influence on his classmates, as well as his one-of-a-kind sense of humor, had an undeniable and positive influence on what was really most important in our program: human and musical interaction."

Two of the album's thirteen numbers—pianist Jeff Jenkins' soulful "Waltz for Joey" and Oxman's light-hearted "This One's for Joey"—pay direct homage to Pearlman, while the last one, John Coltrane's "John Paul Jones," features Oxman in a trio setting with Joey Pearlman on bass and his twin brother, Stevie, on drums. The brothers, who had just completed their junior year at East High, affirm why any acclamation sent their way was neither misplaced nor overstated. Joey Pearlman also wrote the rhythmic and tropical "Garden Song" while still enrolled at East High. The Oxman quartet's bassist, Mark Simon, is splendid there, as he is on every number.

The homage to Joey Pearlman is the first of several. Oxman wrote "The Gojon Jazz Messengers" for friends in France, "Lady Vera" for another Frenchman's vintage Rolls Royce, "Clark's Spark" for East High colleague J.J. Clark, "Christine" for close friend Christine Blanchart, while Jenkins composed the minor-key "Khalid" for organist Larry Young. And we mustn't overlook the song with the most irresistible title of them all, "Joshua Fought the Battle Against Trump & Co.," written by Oxman for fellow saxophonist and friend Josh Shapiro. Oxman's "Debtbussy" tenders thanks to Claude Debussy for the use of his whole-tone scale from the solo piano composition "L'Isle Joyeuse." Completing the program are the standards "Blame It on My Youth" and "In the Wee Small Hours of the Morning."

Jenkins is the pianist, Simon the bassist, Todd Reid the drummer on all but the last number, and they team well with Oxman whose tenor is smooth and wrinkle-free. It's a first-class session, and even though Joey Pearlman had departed before its conception, he left a large footprint, one that Oxman's quartet traces quite well.

The Gojon Jazz Messengers; Lady Vera; Joshua Fought the Battle Against Trump & Co.; Waltz for Joey; Clark’s Spark; Blame It on My Youth; Christine; In the Wee Small Hours of the Morning; This One’s for Joey; Garden Song; Khalid; Debtussy; John Paul Jones.