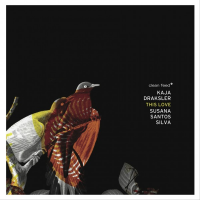 Slovenian pianist Kaja Draksler and Portuguese trumpeter Susana Santos Silva came together at Lisbon's Culturgest in March 2015 to create This Love. While it's their first duet album, they've been making music together in various groups since 2008, first in the European Movement Jazz Orchestra, an international big band of young up-coming musicians, and later in short-lived units like Cows in Trees. Apart both boast burgeoning discographies with Draksler's solo The Lives Of Many Others (Clean Feed, 2013) attracting favorable attention, while Silva's ten dates as leader or co-leader include a brace with her LAMA trio with guest reedmen Chris Speed and Joachim Badenhorst.

In a program comprising two pieces from the pen of each woman, bookended by a pair of jointly credited improvisations, the overwhelming impression is of intimate dialogue shot through with space. Near telepathic execution brings to mind the correspondingly constituted duet of pianist Satoko Fujii and trumpeter Natsuki Tamura, especially in the vamps and exploration of novel timbres. However the lyrical sensibility which forms an additional distinguishing trait here comes out even in the most unscripted situations, such as the minor key trumpet strain extemporized amid the unearthly string scrapes and resonance on the concluding "You Persevere."

Similarly wide ranging in her influences, Draksler often revels in the contrasts between different voices. Not only between the registers as expected, evidenced by the wistful title track, where her right hand runs sparkle like pinpricks of light against the prevailing darker patterns in the bass, but also between percussive attack on the piano body and manipulations of the strings and interior, which grounds "Hymn To The Unknown." That particular number also bears further testament to the shared love of melody as a Satie-esque air emerges from the taps and flutters, which Silva picks up on too for a lovely ending.

Even when only one instrument is in play, the ethos is to extend the overall mood rather than construct an individual statement. But it is in close tandem that they achieve the most affecting impact. Each cut presses the point. On "Laurie" interaction fluctuates between call and response and echoing phrases. It starts with a bubbling trumpet hum, before a questioning piano figure joins, then sweeping glissandos prompt a flurry of trumpet reveilles in reply.

Silva fosters unostentatious technique which mixes legato distortion, quivering tremolos and repeated motifs. She notably performs a beautiful series of yearning yelps on flugelhorn which reverberate and decay through the piano soundboard on the pensive "Forgotten Lands." Such mercurial give and take reaches its peak on "Foolish Little Something" where careening trumpet doubles roller coaster piano until fragmenting into more of the open interplay which makes this disc such a pleasure.

Laurie; This Love; Hymn to the Unknown; Foolish Little Something; Forgotten Lands; You Persevere.