Yoni Kretzmer: This Is Our Very First Album Together

By GLENN ASTARITA
December 27, 2014
Sign in to view read count 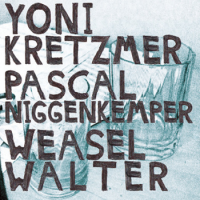 Distinguished Israeli improvising, avant-jazz saxophonist Yoni Kretzmer has several albums to his credit with fellow countrymen and American notables, such as drummers Mike Pride, Andrew Drury and bassist Jason Ajemian. Since he's recently moved to Brooklyn, N.Y., the artist ingratiates his faculties into the region's intensely fertile improvising scene, where almost anything goes when the studio tapes roll.

The album moniker is rather humorously integrated into the actual song titles on a per-track basis, but the trio's focus is not simply correlating inspiration or thematic underpinnings, framed on song titles. It's more about the artists' output amid these highly energized works. It's an improvisational slugfest, led by Kretzmer's scorching vibrato and serrated phrasings. Hence, the band abides by a sense of urgency and a hardcore approach that demands the listener's attention. Then again, the musicians' galvanized attack leaves the listener with no choice, but to focus on the excitable dialogues.

ADVERTISEMENT
The trio's massive convergences are apparent on "Is," as Kretzmer inaugurates the festivities with intricately exercised phrasings above Pascal Niggenkemper's linear notes, as drummer Weasel Walterkeenly injects a wedge into the developments with his staggered patterns. Yet, they deterministically raise the pitch, amplified by the bassist's lower register arco passages and the drummer's rumbling movements. Here, the band creates a string of foreboding circumstances and begin "Very," with a subdued outlook, planted by Niggenkemper's simple motif, serving as the heartbeat. On this piece, the musicians stop, start and regenerate ideas via shifting choruses as Kretzmer is seemingly crying out for help with his gruff, plaintive cries. During other tracks, the trio takes its time engineering a fractured melody or emotive sensations while intermittently using space as an additional instrument, coupled with seething bump and grind mechanisms and a host of surging plots and temperate intervals.

This; Is; Our; Very; First; Album; Together.