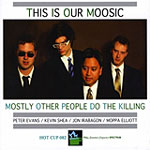 Mostly Other People Do The Killing (MOPDtK), a quartet led by bassist Moppa Elliott, draws from a plethora of styles and genres in its third album, This Is Our Moosic. Traces of Ornette Coleman (the title and cover satirize the saxophonist's famous disc), John Coltrane and even Danny Elfman and Billy Joel emerge from the group improv in the nine tracks. The songs are out there but also full of familiar phrases. This Is Our Moosic is a true declaration of MOPDtK's aesthetic and dynamic—daring and risky, but also humorous and fun.

Elliott begins "Drainlick" with a phrase he says his father calls "the obligatory Blue Note Boogaloo"; almost every jazz album opens with one, Elliott writes in the liner notes. The steady, familiar beat of that phrase allows drummer Kevin Shea to play a more integral part in the improv. His rhythm can and will often shape the path on which the quartet continues. In "Two Boot Jacks," for example, he defines the pop-jazz feel of this tribute to Boots Randolph with an upbeat, swinging tempo.

This Is Our Moosic is full of references to both old and new. "Biggertown" incorporates three rhythm changes—B, G and E-flat—that were the main keys used in John Coltrane's "Giant Steps." "Fagundus" is a tribute to later Coltrane and is over the top, rife with raging trumpet (Peter Evans) and saxophone (Jon Irabagon) duets and solos that create a chaotic atmosphere within the loud, swinging tune.

"The Bats in Belfry" has, by far, the most interesting mixture of influences. Based on Danny Elfman's theme to the original Batman movie, with a Debussy reference thrown in for good measure, the tune features solos from all four band members. Evans provides a welcoming contrast to the pop feel of the tune by toying with phrasing and including innovative tones and sounds on the trumpet.

Elliott composed the songs on this CD loosely and with the group's abilities and skills in mind. Though he peppers the album with references to bebop and '60s avant-garde jazz, he encourages the quartet to experiment and disregard his notations as they see fit. Each player, Evans and Irabagon especially, experiments with the range of his instrument and makes This Is Our Moosic stand on its own as a free jazz CD with controversial things to say.