By Suzanne Lorge
November 13, 2008
Sign in to view read count 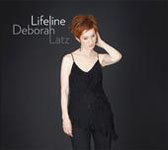 Deborah Latz is a bold singer with a strong sense of her own musical identity. So sure-footed is she that it's hard to imagine her needing a lifeline—she's more the type to throw one to the sinking. Lifeline does just that—the 14 tunes pull the listener into Latz's fast-moving ship as it skims across her repertoire of standards to safety on the opposite shore. Latz kicked off the CD at New York's The Kitano on October 1, 2008, and for the most part the show and the CD paralleled each other. Latz's opener, "Les Fueilles Mortes," which features guest saxophonist Joel Frahm during the contemplative, improvised intro, shows off her effortless technique: her free vocal line is clear and perfectly centered.

Her technical facility is most evident, however, when she sustains a pitch at a pianissimo for several measures as at the end of the second tune, "I Get Along Without You Very Well." Despite the softness of the sound this trick requires a vocal strength and melodic sensitivity to make it work. On both the CD and in performance Latz uses an ample amount of vocal improvisation and her ideas seem to hail from a variety of sources. In one moment she'll invoke a standard jazz lick and a minute later she'll let loose in an open-throated caterwaul; these devices turn "My Favorite Things," the tune that Latz calls the "nucleus" of the album, into something that Rodgers and Hammerstein had not imagined, perhaps. Around this revolve other tunes that surprise for their innovation or delight for their inspiration— a medley of "Tea For Two" and "Day In/Day Out"; "Waltz For Debbie"; "Don't Explain and Latz's closing number, a sweetly romantic rendition of "La Vie En Rose."

Behind all of Latz's innovation and inspiration lies a strong rapport with her band. She records and performs with the same group of musicians: Frahm, Daniela Schachter (piano), Bob Bowen (bass) and Elisabeth Keledjian (drums). The band is a tight and unobtrusive bunch, leaving most the spotlight for Latz, stepping into it only long enough to distinguish themselves as soloists. In short, each is a first-rate accompanist, a job that is often much harder to execute than a well-phrased solo.

Les Feuilles Mortes; I Get Along Without You Very Well; Witchcraft; Tea For Two/Day In