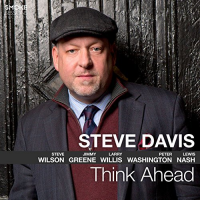 Trombonist and composer Steve Davis has released his new album on Smoke Sessions Records, entitled, Think Ahead. The inspiration for the title comes from the art of reacting to the unpredictable, but thinking ahead can aid in preparing for whatever the future may bring. The trombonist is joined by saxophonist Jimmy Greene, pianist Larry Willis, bassist Peter Washington and drummer Lewis Nash, each are well-known in the jazz world, but this is not a session of strangers, Davis has a long and deep history with each player. The result is a profound, impeccably swinging, fiery collection of eleven tunes.

Think Ahead has four arrangements and the balance are Davis' original compositions. The set starts with the bold bouncing swing of Tony Williams' "Warrior." The frontline instantly displays their power and tight ensemble passages. This proves to be an ideal choice for an opening track. All three horns and pianist Willis take solos before Nash takes his own fiery turn. Davis' solo focuses on building motifs and has a relaxed feel to even the quickest of phrases. Both Wilson's alto and Greene's tenor are in top form and dig in to the big beat being supplied by Nash and Washington, to spin excellent solos. Willis is melodic and constructs his phrases between wide moving voicings.

"Mountaintop" takes its title from a more inspirational leader in that regard, Dr. Martin Luther King Jr.—in part because the strong chords that open the minor blues evoke Dr. King's hopeful message, but also since the recording date happened to land on the January holiday in his honor. Davis' writing is just like his playing, focused and to the point with a joyful energy. Wilson's playing is on fire on this one, eloquent lines and colorful substitutions abound. Davis and Greene trade solos in an excellent display of musicianship and listening. Nash's fire pushes the whole affair with an energy that just makes the foot tap and a smile form. There is nothing better than feeling joy from music.

The familiar standard "Polka Dots and Moonbeams" brings in a tender moment. Willis begins the selection with a solo piano intro that recalls Bill Evans. Davis plays the A section of the melody with an casual fragility that really allows the listener to hear his control on the trombone. His warm focused sound and accuracy of pitch makes this a welcomed addition to the cannon of this standard. Washington's big woody bass sound growls in the bottom register and comments in the spaces in the upper register with Willis keeping the sonic fabric moving and colorful all the while.

Finally, "Farewell, Brother" ends the date on a loving but tragic note. This beautiful melody was written as a heartfelt tribute to Davis' brother. Just after Christmas Davis received a phone call informing him that his brother, Peter, had passed away suddenly from an aortic aneurysm. "It's one of those things in life that you think could never happen to you, it happened in my family," Davis says. The tune focuses not on Peter's too-early death, but on his infectious sense of humor and his giving spirit. Davis' brother was a social worker and Peter's clients would often refer to him only as 'The Welfare'—Davis flips the 'welfare' around into 'farewell,' a final joke that Davis knows Peter would no doubt have appreciated in "Farewell, Brother." Think Ahead is a fun swinging date that has it all: great playing by top-players, a long history and respect among the players, and eleven well-written and chosen tunes as solid vehicles for expression, and express it does.