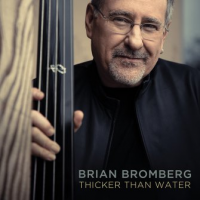 Brian Bromberg specializes in smooth jazz. That's music with rough edges removed. He plays it on basses, upright and electric, and on piccolo basses which are tuned to sound like guitars.

It's all fiendishly clever but Bromberg remains modest. He uses a whole side of the album's cover to thank everyone, including God, "for trusting me with the gifts that you have given me."

He's had his ups and downs. In 1979, when he was just 19, Bromberg toured with Stan Getz, then went on to release a series of solo albums used all over the world to demonstrate high quality stereo equipment, and was nominated for a Grammy.

Then two years ago an accident resulted in him breaking his back in two places with severe trauma. He made an amazing recovery, celebrated here with what he describes as "high energy, funky, in-your-face, original music ensconced in memorable melodies, infectious grooves, and deep pocket." George Duke, Randy Brecker, Brandon Fields, and Gary Meek helped in its creation.

There's actually a reflective, almost melancholy feel to many of the tracks, with Bromberg paying homage to the blue-eyed soul sounds of his youth. Most are based on funky, repetitive bass riffs, kicking off with "Is That The Best You Can Do?" and "Minneapolis 1987." The title track is looser, more jazzy.

"Coupe De Ville" builds slowly before settling on a bass riff, followed by a tenor solo from Najee, which keeps the proceedings very much on the smooth side of soul.

"Trials and Tribulations" sees Bromberg in thoughtful mood but with some very fast piccolo bass work (sounding like guitar). "Uh-Huh" shows off his orchestrating skills with a cast that includes George Duke playing one of his last gigs.

"Your Eyes" is a lovely, relaxed ballad and is followed by "Land Of The Rising Sun," Bromberg's take on Japan. This comes as a welcome surprise after all the bass riffing, featuring Mark Hollingsworth on bamboo flutes and June Kuramoto, from the band Hiroshima, on koto.

To close, Bromberg reverts to upright bass for "A Familia," keeping it short and sweet, which is how upright bass solos should be.