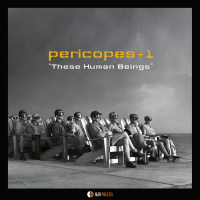 Having captured the favorable attention of saxophonist Dave Liebman and fellow Italian trumpeter Enrico Rava, Pericopes + 1 enters the American market with These Human Beings with the "+1" representing the addition of New York based drummer Nick Wight. The varied program, musical interactions and progressive thinking behind it are likely to generate interest on this side of the Atlantic.

In 2013, saxophonist Emillano Vernizzi, a Professor of jazz saxophone at the Conservatory of Music of Parma, Italy won first prize of Umbria Jazz Contest with a project called "Pericopes." The other half of the original duo—pianist Alessandro Sgobbio—has won multiple awards in Italy and France and led a Paris-based trio. The pre-Wight Pericopes earned a nomination in Musica Jazz Magazine's "Top Jazz" poll for "Best New Italian Jazz Talent" (2012), and "Best Italian Jazz Group" (2013). Pennsylvania native and now New York based drummer Wight joined the duo on their 2012 Paris concert tour and helped to reshape their musical direction.

Throughout the first three pieces on These Human Beings Vernizzi and Sgobbio keep up an engaging dialog; not necessarily in complete agreement but like two story-tellers with unique perspectives on the same narrative. The last of those three numbers—"Jersey Zombies"—is where the trio collaboration really kicks in. With slightly discordant drums leading in, Vernizzi and Sgobbio delay their entry but then take the piece in a nicely off-kilter direction. Wight's intricate layers and varied timing add a rich and complex texture.

There's a good deal of variety on These Human Beings from the old world dance theme that lurks just below the surface of "Insunity" to Wight's cymbals washing over the set-up to a spoken word segment on "Changing World." The Greek definition of pericope is a set of verses that forms one coherent unit or thought. Vernizzi, Sgobbio and Wight fit that definition perfectly and These Human Beings is an impressive outing.