By Friedrich Kunzmann
January 14, 2019
Sign in to view read count 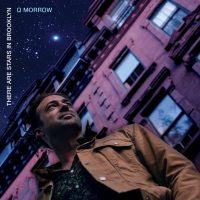 While coming across an eclectic mix of various ethnic styles fused with popular music genres isn't an exception in jazz these days (and hasn't been for a while now), one rarely finds as many different influences framed in such coherent compositions as on There Are Stars In Brooklyn. The homogenous instrumentation and production furthermore add to the euphony of the record. This cohesiveness however doesn't mean that New York-based guitarist Q Morrow's writing and performance don't demand the listeners' full attention. There are plenty of rhythmic as well as melodic intricacies spread across the record to keep it interesting even after several spins.

One of the many influences Q Morrow incorporates in his music most prominently are Brazilian rhythms, which seem to blend naturally with his nylon-string strokes. Performed solo, "Sueno De Miel" and "Inferno Astral" demonstrate this facet in a quiet but clear manner—the latter being based around a classical guitar exercise. Opener "There Are Stars in Brooklyn" and the funky "Chinook Passing" take a different approach to somewhat more groove and speed. Accompanied by the alternating (song by song) duo of Will Vinson and Evan Francis on flutes and saxophones, the melodies are engaging throughout and illustrate intriguing conversations between one another as well as in threesome with the guitar.

Rumba-infused "Pupusa De Jamaica" features a poignantly virtuoso solo by Morrow that seems to feed off of the drive provided by the tight rhythm section. The latter, which is made up of Sam Brevan on bass and Raj Jayaweere on drums, keeps a tight ship throughout by always finding the right compromise between a guiding role on the one hand and a more active one on the other.

There are Stars in Brooklyn is in no way a traditional sounding album, its diversity perhaps being a bit challenging for some jazz-hardliners. It is the variety in composition however that keeps things interesting throughout. Sprinkled into the mix of South-American melodic phrasings with jazz harmonies are bits and pieces that wouldn't sound strange in a Hip-Hop context—such as the organic loop-resembling phrase serving as an ostinato in "The Do How." In actuality, the latter is actually a complex rhythmic exercise based on the idea of Mora in Carnatic music. Chord-lengths correlating to the corresponding wavelengths, all the while fitting into a 5/4 meter which is defined in a determined repeating run on bass. The most impressive part however being the ease with which Morrow integrates these concepts into the composition.

Things can get quite abstract and heavy as well and demonstrate chord changes one might encounter on a King Crimson album, with "Not Quite Sure Yet" being a prime example. "Loose Ends" is the most straightforward bop exhibition on the album and ties things up with a swinging attitude—a half-time-esque middle section saving the tune from being completely "conventional" .

A fine sophomore album by a guitarist who's trying something different and, in passing, proves an exciting composer who we should be on the lookout for in the near future.