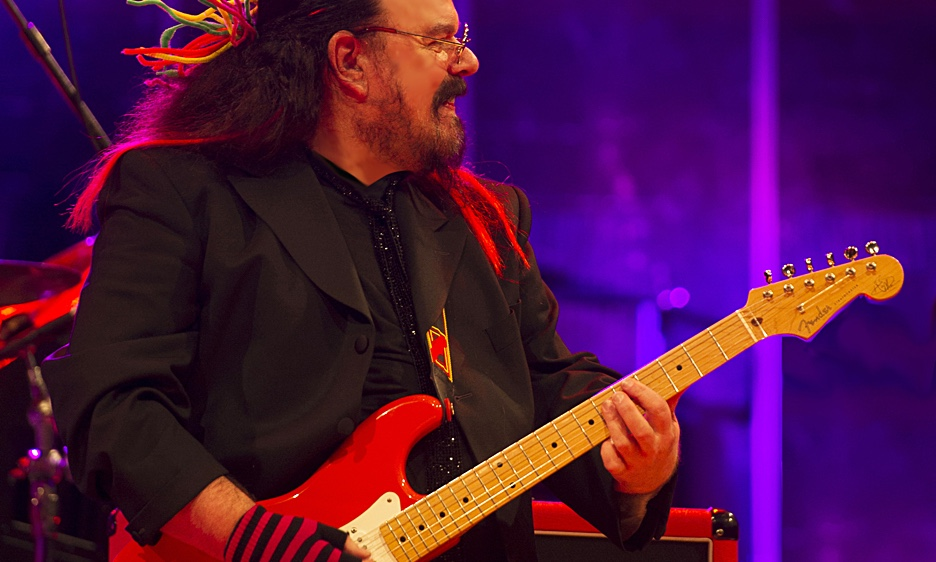 Youssef's repertoire blends Syrian folk, Arabic classics, and original compositions. Her song "Horizon" had a strange stylistic resonance with the music of Madagascar, illustrating potential connections between traditional forms, with Nott switching between frame drum and small tambourine. Morse- Brown negotiated the lower regions, with bassy plucking. "The Sea" used a foot pedal loop on the cello. An increasing number of percussionists use personalised arrays that ignore conventional set-ups, instead choosing particular ways to fine-tune their sound, often featuring a resonant cajon at the core. Nott picked up a larger daf frame drum with metal rattle attachments, also making the occasional cymbal strike.

"Too Many Questions" (the quirky number of the night) was too self-consciously "rebellious" in its approach. Directly comparing this performance with Youssef's 2017 Birmingham show made these sets seem quite mainstream, losing the intensity that Youssef's Iranian companions brought to the material. This evening was a more lightweight affair, not least due to the presence of Nott and Morse-Brown. Youssef was talking more between the pieces, being more extroverted, but still not the best teller of tales. It was all still a people-pleaser, but the larger audience brought this gig into the realm of crowd participation and obvious entertainment tactics, losing a lot of the music's melancholy poise.

The Australian singer Vika Bull has recently been devoting herself to the repertoire and portrayal of Etta James, that great singer of blues and soul songs whose prime period was the late '50s to the late '70s. This concept was premiered in Melbourne in 2013 and continued into a heavy tour around Australia and New Zealand, and now in the UK. Her tour was sold as a theatrical show, but the reality was based more in the earthly, and earthy, plane of a themed tribute.

Bull refrained from acting out the part literally, electing to spin the Etta James yarn between numbers, highlighting lovelife and drug life alongside musical creation and career breakthroughs. These areas were often fused into a single flow. Her Australian accent and valiant half-American twang lent an odd slant to the proceedings. Yet the complete absence of a visual storytelling sequence on the stage's rear screen severely hampered the performance. This choice was likely due to licensing problems with photographs rather than a deliberate tactic. Instead, a nearly static airbrushed street scene moved around zooms and angles. It was another reason why the evening came across as a gig rather than a "show."

Bull was ably assisted by a strong band complete with a suitably powerful horn section. Ultimately, judged as a musical performance, Bull and The Essential R&B Band delivered the goods with spunky, hit-filled spark and momentum, also giving various instrumental soloists equal space around the flaring vocal core. "Blue Suede Shoes" ran at a blurred pace, loaded with a gruff baritone saxophone solo. Trumpet and trombone also released their charges, and the combo provided spirited, gospelly backing vocals. James's 1954 single debut, "Roll With Me, Henry," had a fine Johnny Otis-style vocal from trombonist Ben Gillespie. "Spoonful" was gutsy. "Out On The Street Again" entered the '70s funk zone. "I'd Rather Go Blind" provided an understandable peak, and the encore of "Take It To The Limit" was a surprise pleasure from James's later years.

There is quite a contrast between The Move and Wizzard, two of the chief combos fronted by singer, guitarist, and songwriter Roy Wood. Formed in the late '60s, The Move released a potent run of highly successful singles. They enjoyed a fine balance between pop and psychedelic rock, with Wood's touring gang literally throwing themselves into the audience, one after another, mounting up spectacular numbers that we might have now forgotten. Wood's work with The Move isn't discussed as much as it should be, considering their sheer number of significant tunes. The best one is still "California Man," promptly followed by "Flowers In The Rain," "Blackberry Way," and "Fire Brigade," the cream on a full flagon of classics.

Wood also co-founded the Electric Light Orchestra, but had the good taste to depart that bland bunch just before they began recording their second album. This was when he formed Wizzard, a more commercial, glam-geared crew, although one still issuing the expected high level of chart- destined compositions.

Wood's Rock And Roll Band is devoted to The Move, Wizzard, and a clutch of their later songs. At the Grand Opera House, the four-piece saxophone section stamped a tough, rhythm and blues smear across the stage. Wood spent most of the set either spinning out intricate, melodic guitar riffs or compact solos. His voice retains its distinctive high cry. Wood even played a number on the bagpipes, a strange interlude adding to the good time humor already running through the leader's deadpan Birmingham wit (which might seem overly glum to folks unable to relish the misery of the Midlands).

The Wizzard hits are more direct. They're stomping anthems with searing big band blues and swing, stuffed with reed honks. Peaks included "See My Baby Jive" and "I Wish It Could Be Christmas Every Day," the latter tossed off almost casually as a seasonal climax to the set. Wood was relaxed and confident, secure in the knowledge of his outstanding songbook, packing his history into a rolling momentum of what turned out to be a very concise and punchy set. Not much more than an hour in length, each of his many majestic ditties rarely lasted more than two minutes.

Blackbeard's Tea Party are native to York and are one of the UK's finest folk rock outfits—doubtless more influenced by The Pogues than Fairport Convention. Their Christmas Party has become a warmly anticipated tradition, in recent years held at The Crescent, a traditional working men's club reborn as a hot-wired community music venue. The six-piece band is fronted by Stuart Giddens (vocals/melodeon), Laura Barber (fiddle), and Martin Coumbe (guitar), but its percussion team of Liam Hardy and Dave Boston are also somewhat extroverted. This leaves bassist Tim Yates as the "quietest" band member, but only when compared to the thrusting stances of his colleagues.

This band have clearly asked themselves "Does humour belong in music?" as its antics assist in throwing their message out with force. Giddens's wry delivery and wordy content connect to the audience with both charisma and bawdiness. He has an aspect grown out of Jacques Brel and Bertolt Brecht, also fusing Shane McGowan with Freddie Mercury (which is no mean feat). Barber's fiddling and Coumbe's guitar forge a tension between rootsy stomping and rocky intricacy, ending up with a complicated folk headbanging strategy. Just about the only criticism is that the Blackbeard repertoire has remained fairly unchanged in recent years. Yet they have just taken a step towards remedying that situation by releasing their second EP, Leviathan (BTP Records, 2018), injecting new songs into the set. Many of their older songs are well worth their continuing inclusion, not least "Landlady" and "The Ballad Of William Kidd."

The Blackbeards bowed out as the show climaxed. Then, unusually, a short seasonal film sprang up on the stage's screen, offering an alternative holiday experience and further emphasizing the band's sharp sense of the absurd. Once this witty mini-movie ended, the band sprang out again, garbed in ridiculous gear, with Giddens dressed as a gigantic Christmas cracker. They sustained the rockin' revelry for quite a long set, around 90 minutes or more, presented with an organized attention to chaos.

The following night at the same venue, there were no seasonal aspects whatsoever, but rather a calm and attentive gathering caught in the spell of Ben Ottewell's solo performance. He played acoustic guitar and occasionally ukulele, singing in the distinctive low, gravelly, bluesy rasp that was such an identifiable sound during his formative years with Gomez. That two-decades running band reunited and toured earlier in 2018, so this spate of solo dates represented a careful winding down of the electricity consumption.

Ottewell's songs mulch blues, folk, rock, and the singer/songwriter tradition, ending up with a distinctive hybrid. There was only a brief outbreak of rear muttering amongst the crowd, due to slightly long pauses between songs. Bespectacled and with a prodigious beard, Ottewell complained about having difficulty concentrating, and the rapt silence was re-established. Considering that this was a pre-Christmas Saturday night, he really should have been satisfied with the degree of attention being paid to him. Most of the material was from Ottewell's well-established solo oeuvre but, with a call for whiskey, he gradually introduced a handful of favorite Gomez numbers towards the end of the evening, as well as a Grateful Dead cover that sent several audience members into gyratory motion.