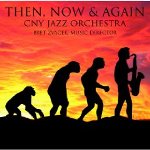 CNY is not an acronym for Crosby, Nash and Young; it is the musical abbreviation for the Central New York Jazz Orchestra, formed in the mid-1990s and led by musical director Bret Zvacek. The band performs for schools as well as the public in upstate New York. The album consists of a CD and a short DVD which documents the orchestra's performance at the historic Hotel Syracuse in November 2007. The cover art of this package shows a blazing sunrise featuring four stages of man's evolution ranging from ape to a sort of homo erectus saxophonus colossus. In the five performance selections (approximately 25 minutes) on the DVD, the music is given a visual personalization that adds to the enjoyment of the album.

Then, Now & Again is appropriately titled, as the ensemble performs enjoyable mainstream big band jazz music in the styles of Duke Ellington, Count Basie and Woody Herman. Its performance of the originals "Status Quo" and the bluesy "Things Happen" seem right out of the Basie songbook. This big band sounds like it would fit in perfectly at New York's Village Vanguard as it does in its regional upstate venues.

In what might have been a gimmicky beginning, CNY opens with a version of composer Irving Szathmary's hit television theme song for Get Smart, which was perhaps timed with the release of the 2008 film version. However, its approach is quite serious, presenting both originals and a sparkling version of the Ron Carter/Miles Davis tune "Eighty One," in which there are impressive solos from trombonist Joe Columbo, trumpeter Jeff Stockham and the reed section. Gershwin's well-received "I Loves You Porgy" is played at a faster than usual tempo which spotlights Stockham's trumpet.

As for familiar material, Quincy Jones' "The Midnight Sun Will Never Set" is played nostalgically, with Joe Carolla featured on a Johnny Hodges-like alto. As an album closer, Pat Ballard's 1950s pop hit "Mr.Sandman" is given a similar treatment with a sweet solo from Pat Robson on trumpet. The CNY Jazz Orchestra leaves a lot of pleasant musical memories on this debut.