BY KEVIN PRESS
February 1, 2018
Sign in to view read count 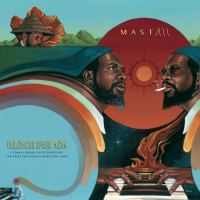 Jazz anniversaries are always a bit underwhelming. They come and go, their significance trumpeted in earnest Facebook posts. At the end of the day though, the artists we honor remain underappreciated by casual music listeners.

The 100th anniversary of Thelonious Monk's birth date last October is a case in point. His contribution to American culture—and to jazz culture globally—is on par with that of the 20th century's great artists. To describe him as a giant is to state the obvious.

But it's hard to imagine that Oct. 17, 2017 saw any meaningful uptick in Monk sales. Harder still to find signs of a sustained boost in interest.

Still, he is among our heroes. And when a group of musicians gather to record a tribute as wide ranging and tightly performed as this new one, we can take some solace in the fact that our man remains as influential as ever.

Behind Tim Conley's (a.k.a. MAST) leadership, Thelonious Sphere Monk offers up aggressively modern interpretations of Monk's music. Major works like "Epistrophy," "'Round Midnight" and "Straight No Chaser" are here. So too are compositions you may be less familiar with.

"Epistrophy" signals the band's willingness to push Monk fans beyond their comfort zone. Its first 30 seconds is a cross between a drum and bass track and a broken Space Invaders game. But like a lot of the album, MAST's horn section jumps in quickly and brings us right back to what we love about Monk. The forcefulness, the intricacy, the way Monk challenged us is captured faithfully again and again on these 16 new recordings.

"Oska T" features a cracking beat that would sound right at home on a downtempo electronic track. Paired with both a piano and brass band presentation of the tune, the mix is infectious.

That's followed by the great "Nutty," which opens with one of the album's several recordings of Monk speaking: "I like to reach everybody," he says. "The public plus the musicians. That's a standard I set for my songs—something that will get to the people's ear, plus no criticism from the musicians." These documentary-style additions are fun and add to the disc's modern feel.

The track itself features an electric piano performance by Conley (an inarguably gutsy call). He keeps the piece grounded while Dan Rosenboom's trumpet leads a brass section worthy of the great man himself.

Conley began his career as a guitarist. His delivery on "Pannonica" is as good a measure of his talent as any on the album. What makes this tribute work is that he's surrounded by equally strong players, all of whom appear to revere Thelonious Sphere Monk.