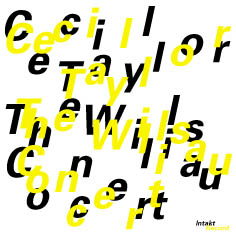 It’s been quite a few years since I’ve listened to pianist Cecil Taylor’s classic solo performance Silent Tongues. However, with his latest solo endeavor, recorded live on September 3, 2000 at the Jazzfestival Willisau in Switzerland, the pianist has added yet another astounding entry into his already rich recorded legacy.

The thrust of this outing commences with the fifty-minute work titled “Willisau Concert Part 1.” Here we are treated to Taylor’s exhaustive explorations and spider-like manipulations of his grand piano keyboard. The artist intertwines gigantic block chords with contrapuntal flurries amid a complex development of rhythm, and Taylor’s creative genius surfaces throughout. At times, it’s almost like being fixated in a time warp, as Taylor dishes out subtle melodies in concert with multi-layered micro themes. (You’d swear there were two pianists performing.) We can also thank the audio engineers for their shrewd mic placement and exquisite recording processes. Thus, the listener gets to experience the live dynamic in multidimensional fashion!

Taylor’s improvisational techniques and thematic development could be akin to reading chapters in a book, where the various plots are divulged in sequential fashion. On the first piece and the thirteen-minute “Willisau Concert Part 2,” Taylor renders slanted discourses along with multidirectional frameworks via his muscular attack and acrobatic maneuvers. “Willisau Concert Parts 3 thru 5” clock in at less than two minutes each, although at this juncture, he may have depleted the audience’s energy. Yet these short works appear to be minor extensions of the first part.

Greatness can be an ongoing trait! And where others might fail, Taylor succeeds in often awe-inspiring fashion. Hence, a notion that becomes quite significant during this stunningly executed magnum opus! (Emphatically Recommended)