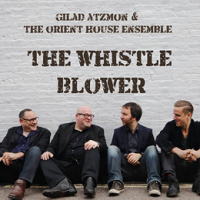 The Whistle Blower is the eighth album from saxophonist Gilad Atzmon and his Orient House Ensemble, but sounds as fresh as the first. As one of the most fearless improvisers of the UK jazz scene, Atzmon has always worn his politics loudly on his sleeve, and here the story of an Israeli Jew who left home in search of new identities rings truer than ever over the course of seven original tunes. The listener emerges from the other ends of their tunnel with affirmation not only of survival, but more importantly of staying true to one's expressive potential.

"Gaza mon Amour" assembles a prime groove right out of the box, priming the canvas for Atzmon's sopranism. The tone he gets out of that higher reed is as distinct as his angular notecraft, sounding more like a Middle Eastern zurna than a Western woodwind. Wordless vocals from the band spike the rhythmic punch before their leader unleashes a sermon on alto. His integrity catapults him off the map into his own cartographic universe, unafraid to hit the ground running wherever may land. From hot spring to cool stream, Atzmon eases into "Forever," the first in a virtuosic ballad sequence. Yet what at first appears to be a leaner body reveals itself to be just as muscular as the previous, for there is an underlying strength to Atzmon's writing that fortifies his soloing with metaphorical protein. Pianist Frank Harrison adds shading to the canvas, allowing just enough sunlight from soprano to spread its warmth to distant grasslands on wings of loving, persistent memory. Deeper sentiments await in "The Romantic Church." Here Atzmon wields his alto more like brush than scripture, while synth textures from Harrison add cinematic flair. "Let Us Pray" continues the sacred theme. Atzmon on soprano cracks open a tirade of exposition, leaving Harrison to unpack some of the more intimate acrobatics. He works from short story to novella, allowing the inner drive of the music to push things forward and beyond. Drummer Chris Higginbottom offers artistic subtleties of his own at last call. Atzmon switches hats in "The Song," for which he plays accordion. This supple waltz is rich with lived experience and transparent optimism, and spotlights bassist Yaron Stavi's lyricism. The next two tracks, "To be Free" and "For Moana," put the soprano back into play, balancing rubato impulses with flourishing pianism before the title track finishes out the set with a colorful smile in a rhythmic and stylistic mash-up. As this knowing wink proves, there is nothing arbitrary about Atzmon's sound. He is more than a storyteller; he is a story-bringer who drops narratives like weighty tomes, the contents of which he proceeds to give summaries in one fell swoop, and always with a depth of charge that makes any interpretation that follows seem inevitable.

Gaza mon Amour; Forever; The Romantic Church; Let Us Pray; The Song: To be Free; For Moana; The Whistle Blower.