Greg Burk: The Way In 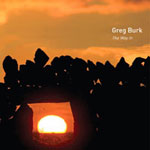 It has been said that a jazz musician exposes his or her soul and is existentially naked when improvising in front of an audience. However, those perfect performances are rare, and most of the time they are just good. At these most common times, a player falls back onto things he has done before, maybe even the night before, and pulls it off for listeners who probably don't know the difference.

Jazz musicians tend to fall into two ill-defined groups: those who express themselves in an understood language, ranging from incessant explorers to technically proficient "repeater pencils (to quote Lester Young)—and those who acknowledge the history of jazz ("the tradition ), staying in touch with it to varying degrees, but challenging the status quo by "jumping off the ledge, knowing that the audience might not follow.

Greg Burk most definitely belongs to the latter group, and his previous two releases, Carpe Momentum and Nothing, Knowing, evidence the independence of thought and development of mind which has led to The Way In.

As Burk writes in the notes, he "prefers freedom to structure, but that freedom has an inherent structure of its own. He recently discovered the Taoist concept of wu-wei, which can be translated as non-doing or effortless doing, where doer and doing are one (see Zen And The Art Of Archery). Paradoxically, one cannot strive to achieve this state, and the best improvisers know this.

Wu-wei, as a philosophy of life and action, defines for Burk that which he had already been trying to do. Bringing his entire self with all of its history to the recording studio, he felt he was really able to let go, and the recording was laid down in one two-hour session.

The Way In is made up of three types of pieces—unprepared and freely improvised ballads (of "Gold, "Sand and "Water ); improvised pieces on prepared (using paper, Burk's fingers and a key ring) piano ("Paper Piano, "Wu-wei Out and "What is This Key In? ); and composed tunes ("Serenity's Distant Dawn, Look to the Asteroid, "Walking the Earth and "Big Bird ).

The sequencing allows the listener to find the "non-doing within each piece as they move between types. The "Ballads are, quite naturally, the most abstract both melodically and rhythmically, and yet they all have an internal logic that carries them forward, making them, to these ears, the most rewarding. The composed pieces use left-hand ostinato phrases that create the foundation for the free playing of the right hand or easily discernable melodic/harmonic construction. Free prepared piano feels like a paradox, and I would welcome the chance to listen to Burk reacting in real time to a piano prepared by someone else.

In the end, this very moving music compels introspection as we watch and listen while Burk brings us into intimate contact with his soul, both human and musical.

Paper Piano; Ballad for Gold; Look to the Asteroid; Ballad for sand; Walking the Earth; Wu-Wei Out; Serenity