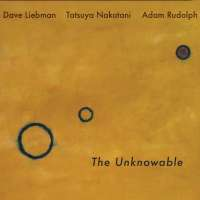 Sax great David Liebman, multitalented percussionist, bandleader Adam Rudolph and prominent Japanese percussionist Tatsuya Nakatani project an otherworldly, Uber world jazz tome on this recording of spontaneous compositions, where song titles were appended by Rudolph as he listened to the track mix. Thanks to the crystalline audio characteristics, the production offers a very detailed soundstage.

The percussionists employ an arsenal of Eastern and Western instruments, aside from Rudolph's live electronic processing maneuvers as the music encompasses an electro-organic platform with sacred passages and other movements where caricatures of the Amazon jungle crossed my mind. Moreover, the trio delves into two—and three-way exchanges which is a component that elevates the interest level, as they pepper and mimic each other via fast-paced conversations and unorthodox rhythmic explosions.

Liebman's screeching soprano sax lines aggressively contrast the background EFX and Rudolph's nimble percussion motif on "The Unknowable." Other movements are offset by Nakatani's shrilling metal percussion sounds that often cut into these improvisations with silvery tonalities as other bizarre episodes develop with creaky sound-sculpting passages and renegade storylines. But Liebman launches a fierce bop tirade atop rolling and pummeling cadences on "Present Time."

"Premonition" features Liebman's free-form tenor sax phrasings, complete with plaintive cries, heightened by Nakatani's buoyant drumming and Rudolph's brash accents. Here, the band gels to an ultra-progressive tribal ritual. Nonetheless, the program whizzes by, partly due to the musicians' highly energized activity levels. It's an album that transcends many or perhaps most world jazz type endeavors as the trio pushes the envelope, yielding an atypical sequence of stirring musical events from start to finish.