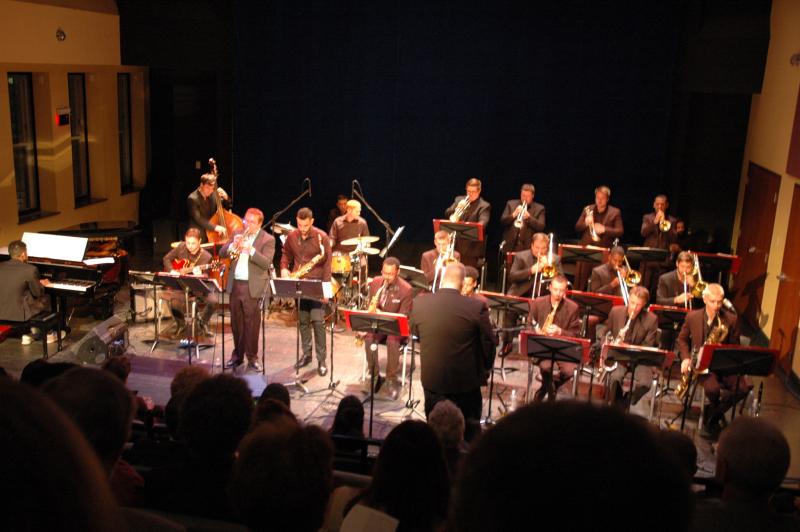 Although the band consists entirely of undergraduate students between the ages of 18 and 22, it has the sound and energy of a top-of-the line touring jazz band.

They were underdogs, but they gave it their best shot. Then they shocked themselves and everyone else by tying for first place with the UNLV student ensemble in the Monterey Jazz Festival College Big Band Competition! They won out over approximately 600 bands, many of them more well-known, bands from much larger colleges and universities, and bands with more experienced graduate students. Who knew? They are the 2016-17 University of the Arts (UArts) Jazz Department Big Band, otherwise known as the "Z" Band. And they're headed back to the Monterey Jazz Festival for a command performance on September 17. Collectively, they are like a football team that just won the Superbowl. And in this celebratory concert on their home turf, as one band member said, they "played their asses off!"

A lot of the credit goes to Matt Gallagher, the band's director. Gallagher is a long-time member of the UArts jazz faculty and trumpet player with the Philly Pops. He is a picture of total dedication to the band and its members. I asked Gallagher about the history of the band, and in particular how it got the unusual name, "Z" Band. He explained: "This year is the 50th anniversary of jazz education at the University of the Arts. The Jazz Band program was started by trumpeter Evan Solot. He led the band well into the 1980s, when saxophonist Bill Zaccagni took over the band. Bill passed away in 2007, and we named it the "Z" Band in his honor. Bill was one of my biggest mentors as both a teacher and a player. He had a very strong personality and was a big influence on all of us."

Although the band consists entirely of undergraduate students between the ages of 18 and 22, it has the sound and energy of a top-of-the line touring jazz band. The lead section players (Andrew Connors, trumpet; Chris Mele, trombone; Anthony Nigro, alto saxphone; Henry Tirfe, tenor; and John Venezia, drummer and rhythm section leader) run tight ships. Part of the group's power comes from their choice of charts and arrangements. The band goes out of its way to get exciting and challenging charts from faculty members, students, alumni, and legendary musicians and bands. For example, they got a hold of Bob Brookmeyer's stunning arrangement of "Skylark." A piece entitled "Floor is Lava," which is so complex that it could have been written to torture the band, was composed by trombone alum Nick Lombardelli and was played in the final competition at Monterey. In addition, they have unique charts from faculty members Norman David, Chris Farr, Solot, Zaccagni, and Dean Emeritus Rick Lawn. Although the band identifies with the sharp, clean sound of armed forces jazz bands like the Airmen of Note and Army Blues, they are capable of executing styles ranging from Count Basie to the Monday Night Village Vanguard Orchestra. In other words, Gallagher has transformed them into a resilient band you'd love to hear at your favorite club or concert hall.

To demonstrate their wares to the Philadelphia and UArts community, the "Z" Band held a "meet and greet" reception at the Café XIX atop the Bellevue Hotel, and then went across the Avenue of the Arts to the University's Kaplan Recital Hall to deliver a highly charged concert to a packed house already in a hypertensive state of mind. If there were a seismic meter that registered audience excitement, the needle would have gone off the grid.

The first half of the concert featured band alumni soloists: trumpeters Tony DeSantis and Joel Anderson, and tenor saxophonist Sam Greenfield. They charged up the audience with the opening number, Alan Baylock's "Intensities in 10 Cities," which De Santis and Greenfield put to good use with virtuosic hard bop solos. "New Girl," in a beautiful arrangement by legendary pianist Duke Pearson, featured Anderson's and Greenfield's expressive lines. Zaccagni's arrangement of Duke Ellington's "I Got it Bad" included some hyperbolic harmonic twists which de Santis put to good use. Following these ballads, the band with Greenfield and Anderson let it all hang out with Vince Mendoza's arrangement of the Brecker Brothers' "Straphangin," with Anderson, Greenfield, and the whole band grooving to make for some artistic mayhem.

The remainder of the concert featured the current band members as soloists. (They won three of the five soloist awards at Monterey,) Rich Shemaria's arrangement of "It Might as Well be Spring" gave saxophone section leader Anthony Nigro an opportunity for an exotic alto solo. Scott Whitfield's "G'Day Mates" afforded an opening for clean, smart improvising by trombonist Mele which seemed to carry some of the weight of J.J. Johnson's and Steve Turre's precision and strong sonorities, while Matt Salazar's trumpet solo embraced some of the locutions of Woody Shaw.

The last two numbers upped the ante still further and proved to be literal coups d'etat! Henry Trife delivered a tenor saxophone solo on "Body and Soul" that was a sheer creative wonder of swing playing that rivaled the best tenor solos on any of the Basie and Ellington band recordings. Trife won one of the soloist awards at Monterey, and in the future, he is going to blast tenor saxophone playing out of the water. Just wait and see.

To conclude the concert, the band went out on a technical limb and made it work. The title of Lombardelli's "Floor is Lava" seems to be a metaphor for the cunning use he made of the lower register instruments swimming beneath the staccato-ish theme and variations of the upper parts of the chart. In addition, there were sections that could have been studies in an etudes book for advanced instrumentalists. The band made it through with flying colors, and after each walk across the high wire, you could feel the relief in the room. In the midst of all that, the band sat back except for occasional riffs while guitarist Sam Riessen and drummer John Venezia delivered some fine and subtle solo work.

The "Z" Band, glowing in the aftermath of this show, is heading out to Monterey to do two sets to a much larger crowd of aficianados in an outdoor setting. If it's possible for the energy level to be turned up any higher, it will be. The group is riding the crest of a wave, and the maker of the waves is director Gallagher, who has attained a god-like status among these young aspirants. Trombonist Mele laughed but was dead serious when he portrayed Gallagher as pushing these musicians to the breaking point: "It's almost become a joke among us band members that once we get out of here, there's nothing we won't be able to handle! I haven't seen anything tougher than what Matt put us through." Gallagher thinks of himself as the equivalent of a football coach who demands the utmost from every player. This can lead those under the lash to loving appreciation or unhappiness, trauma, and resentment. The obvious affection and light- hearted banter that prevailed between Gallagher and his proteges suggests that everything this band does is based on mutual affection, and there is no better formula for success on all counts than a combination of love and hard work. Godspeed the "Z" Band.