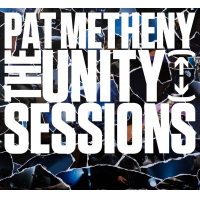 What's in a name? First there was the Unity Band in 2012; after several years of collaborations, solo work and small ensembles, the ever-restless Pat Metheny decided it was time for a steady quartet of his own again. The following year it was expanded to a quintet with a dozen more instruments added to the sonic palette, spurring the name switch to Unity Group. Eventually, they topped off a couple years of extensive touring by setting up in a small theater in front of some cameras (if not an audience) to capture how their live set had developed. The Unity Sessions is the soundtrack from the 2015 DVD of the same name, providing a vivid snapshot of the group in excellent form.

It's an uncommon setting but a very effective one. The format allows for the pristine quality of a studio recording (and control of the big complex Orchestrion apparatus) while keeping the fun spontaneous vibe of a live event. The solos aren't as extensive or the energy as high as it probably would have been in front of a crowd, but then it's not fair to judge this recording by that standard anyway. The chemistry is as tight and lively as you'd want from a live-in-studio recording; it's doubtful anyone would have thought twice about it one way or the other if the DVD hadn't come several months before.

Most of the unit's studio release Kin (<—>) (Nonesuch, 2014) is represented here and has audibly matured from its first recording. The band starts with the album's centerpiece pairing of "Adagia" and "Sign of the Season," effortlessly transitioning from quiet intimate intro to Secret Story-scale epic panorama in the first dozen minutes. There are several of the mini-showcase slots you'd see at a live show, such as the mid-set solo guitar medley and a couple quiet duets interspersed between the more extensive band workouts. Not everything needs to be epic either. "Two Folk Songs" (though not sounding very folksy) builds to one of those flying grooves with the whole band wailing at high speed, and does it in a tight five minutes—practically a drive-by blink in Metheny time.

The rest of the set spans the guitarist's whole spectrum, covering the eclectic "global village" tones of the Unity phase and indeed the range of his career. They revisit the expanded 1986 Ornette Coleman collaboration Song X with "Police People," making it feel perfectly at home alongside Unity Band's "Come and See" and the newer Group's "Born," which continues to show itself one of his prettiest meditative pieces. For Metheny it's all part of the same big inclusive picture, and there's no picture he can't paint with the right group to add their own brushstrokes.

Cuong Vu is no stranger to painting with sound himself, having added his trumpet to two acclaimed Metheny Group albums in the early noughties. It's only natural that he and his former boss were happy to re-connect for a quick three days in the studio. The result is a noticeably less elaborate affair than the Unity set, though this quartet gets plenty of sounds out of the smaller handful of instruments they use nonetheless. While you can definitely hear the similarities between the two that led to their success as bandmates in the past, it's Vu's experimental sensibility that takes the lead here.

The lineup attempts a sort of entropy in reverse, starting in abstract Song X-ish territory and drifting toward more conventional forms as the disc goes on. The leads occasionally twine processed trumpet with classic Synclavier guitar so that it gets difficult to tell which is which (a familiar game Metheny also enjoyed playing with Lyle Mays' keys now and then). It can be difficult to follow along as well—they don't mind stretching one's patience with ten aimless minutes of meandering in "Tiny Little Pieces" or the slow rhythmic plod of "Let's Get Back"—but they inevitably return to unison lines and changes, and it's clear their trust and synchronicity with each other hasn't faltered.

This recording seems like a breather for this crew as they take a break from meticulous compositions. Light on melody and heavy on textures (and sometimes with heavy textures), this is a session more about coasting and grooving than anything else. Just about any listener could appreciate the upbeat "Tune Blues"; otherwise it's a listen best suited to ears that already enjoy the free and formless. Where it comes to the simple fun of playing around with sounds and tones, this is a group that knows their stuff.

Tracks: CD1: Adagia; Sign of the Season; This Belongs to You; Roof Dogs; Cherokee; Geneaology; On Day One; Medley. CD2: Come and See; Police People; Two Folk Songs (1st); Born; Kin; Rise Up; Go Get It.