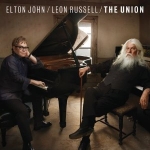 Elton John and Leon Russell are not so unlikely musical colleagues. Russell is slightly the elder, at 68 to John's 63, and within the age difference of two brothers. Both emerged in the early '70s, that fertile period nurtured by Woodstock the year before, and the rise of album-oriented-rock FM radio after. Both are pianists and composers of repute, with similar percussive styles and deep furrows of dirt, church, and Delta. John reveals this to be no accident as he claims Russell as one of his greatest influences.

Early successful Elton John/Bernie Taupin collaborations resulted in song settings cast in nineteenth-century Americana. Like The Band's Robbie Robertson, John and Taupin could deftly capture the sunshine and dust of an agrarian America full of both promise and doom. Russell rose from the dust bowl center of Oklahoma close enough to feel the gravitational pull of the Mississippi Delta, yet far enough away to secure a voice as distinctive as Bob Dylan, as authentic as Johnny Cash, and as profound as Ray Charles. Leon Russell is the bona fide agrarian grit John and Taupin composed around. Their collaboration on The Union is a welcome meeting of empathic spirits.

An early John/Taupin composition that romantically captured sepia-toned America was the Civil War ballad "My Father's Gun," from Tumbleweed Connection (MCA, 1970). It is a bright tome of a confident Confederacy, welcoming the adventure and romance of conflict, fully anticipating a successful outcome and new world order. Whistling past the graveyard, the subject confidently sings, in first person, that ..."as soon as this is over we'll go home / To plant the seeds of justice in our bones...," while cavalierly going to join the fight musing, ..."I'd like to know where the riverboat sails tonight/To New Orleans well that's just fine alright...," without awareness or concern.

Forty years later, an older Bernie Taupin pens lyrics to another Civil War piece, "Gone to Shiloh" from Union, sporting a much different protagonist and perspective than the hubristic young man in "My Father's Gun." John's upbeat soundtrack from "My Father's Gun" is replaced with a marching dirge. "Gone to Shiloh" reveals three distinctively older voices, both temporally and metaphorically. Sung from the Northern third-person perspective, Russell opens with a soldier, somber, even fatigued, leaving home, a far cry from "Shootout at the Plantation." The second verse belongs to Neil Young, smelling of April humidity, addressing the "Southern Man" and "Alabama" allegorically. John sings the last verse, a wife expressing balefully: ..."I pray we see him 'live and well in the fall here / Than that god forsaken place in Tennessee."

The three sing in chorus the chilling lament ending the song, echoing in a very different way the Confederate's intention to ..."plant the seeds of justice in our bones..."

After all of this

If we should prevail

When Sherman comes their way.

That is what 40 years will do for perspective.