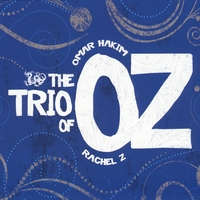 The dilemma for modern jazz artists is how to grab the ears of younger audiences, while remaining respectful of the legacy of Duke Ellington, Miles Davis, and Louis Armstrong without recycling yet another variation of "So What?" The eclectic and restless musical tastes of drummer Omar Hakim and pianist Rachel Nicolazzo (aka Rachel Z.) offer some mighty impressive bait to reel them in, The Trio of Oz's repertoire reading like an hour's worth of college radio station programming. But how to reconcile music from artists including Depeche Mode, Alice in Chains and Stone Temple Pilots with two vets like Z and Hakim, who honed their skills with artists like Weather Report, Wayne Shorter and Steps Ahead?

Quite nicely, since these two masters' résumés also include stints with Dire Straits, Sting and Peter Gabriel, rendering their creation of new ways to splice the seemingly contradictory jazz and rock idioms together into some sort of mutant hybrid—capturing the fun of the latter without compromising the integrity of the former—completely understandable.

When going after a younger demographic, It's best not to pander to them with warmed-over covers of last month's pop hits, already deleted from their iPod; The Trio of Oz demonstrates far more respect for the sensibilities of its target audience. Hakim and Z, along with newcomer, bassist Maeve Royce, have redefined "jazz rock" into an absorbing and stirring hybrid, sans the trappings of cranked up guitars, banks of synthesizers, excessive volume, and piling notes atop each other in an act of sonic overkill.

It's probably no accident the last track, The Police's "King of Pain," is the most familiar to the ears of even the most casual rock listener Written by Hakim's old boss, Sting, it's a lovely, moody ballad delivered here with impeccable taste, as are the improbably named, "Angry Chair" and ominous "I Will Posses Your Heart," by Death Cab for Cutie.

Z says she enjoys playing in trios because she's "greedy," and gets ample opportunity to demonstrate her considerable chops, but she still plays well with others. Hakim is never overly flashy, a tasteful percussionist who never overwhelms with technique when finesse will do. On acoustic bass, Royce is short of the wealth of experience her two compatriots possess, but she's a formidable talent with more than a few moments of Ron Carter-like brilliance. When she alternatively caresses and attacks Coldplay's "Lost" with her bow, it's fully understood why she got the job.

Whenever jazz is in danger of becoming safe, static and scared to stray out of its comfort zone, that's when it's in the fast lane to becoming the muzak for museums naysayers already claim it is. The Trio of Oz strikes that delicate balance between respecting tradition while refusing to be handcuffed by it. There's a lot here, in one of 2010's most brilliant debuts for both purists and pioneers to admire.

Angry Chair; Sour Girl; Det Tar Tid; I Will Possess Your Heart; Lost: When You Were Young: In Your Room; Bizarre Love Triangle; There Is A Light; King of Pain

About The Trio of Oz