Duke Ellington And His Orchestra: The Treasury Shows, Volume 18 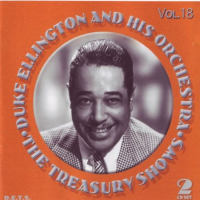 As Duke Ellington leads his band into the opening bars of "Take The A Train," a mighty roar goes up from the radio audience. The moment comes four tracks into the first CD of this double Storyville release, after a somewhat shaky start.

With it there's a marvellous feeling of being back in 1946 at the height of Ellington's popularity.

The experience is worth having to put up with the patronising ABC Radio master of ceremonies, the now dated love songs Ellington included for dancers and incessant kowtowing to James C. Petrillo, then President of the American Federation of Musicians.

The war is over and a bright new future beckons. In one of his plugs for Treasury bonds, Ellington actually predicts the age of mass air travel.

But what is really important about this Treasury Show as far as jazz fans are concerned is his inclusion of two sections from "Black, Brown and Beige," his first major extended work, premiered to mixed reviews at Carnegie Hall three years earlier.

The criticism, especially that of John Hammond, made Ellington wonder whether he was taking the right path in putting the emphasis on longer "works" as opposed to the catchy three-minute singles favored by his record producers.

Jazz was changing. The bebop revolution was extending the music's horizons, taking it away from the ballrooms of the swing era into smaller, more intimate clubs where audiences actually listened.

History vindicated Ellington. His orchestra would have gone the way of all the other big bands but for its leader's dogged pursuit of greater artistic freedom. The broadcasts on these disks find Ellington at a crossroads and—conscious of the mass market radio gave him—he refrains from pushing the envelope too hard. This is just as well. Hammond wasn't all wrong. Ellington described "Black, Brown And Beige" as "A Tone Parallel To The History Of The Negro In America." Given his head, the Duke could be more than a mite pretentious-moi.

Radio brought him back down to earth. "Stompy Jones," and "Three Cent Stomp" were aimed at those who voted for his orchestra in the "swing" section of Down Beat polls. "Don't Take Your Love From Me" and "I'm Just A Lucky So And So" were for those who favored the band in the "sweet" category. Daft though such labels seem nowadays, Ellington needed to heed them to stay ahead commercially (though he was perhaps making a point when he titled one number "Stomp, Look And Listen.").

There's the familiar—versions of "Sophisticated Lady," "Perdido" and "Concerto For Cootie." But there's also the unexpected, including Ellington's takes on Buck Clayton's "Hollywood Hangover" and "Poinciana," which Ahmad Jamal would later make his own.

But the highlights are the two sections from "Black, Brown And Beige." Kay Davis handles "The Blues" extremely well and "Come Sunday" on the second CD allows Ray Nance to parade his sensitivity on violin, in stark contrast with the knockabout "Riff Staccato" on the first disk.

Warning: Ellington's version of Count Basie's "One O'Clock Jump," hyped by the oh-so-hip MC as "just about as solid as you can possibly get," actually isn't a patch on the original, featuring the contrasting tenors of Lester Young and Herschel Evans.

Basie had no ideas above his station—he didn't write tones parallel to anything—which endeared him to John Hammond. Ellington was a far trickier customer; one who didn't like being told to what he should or should not aspire.

CD1: Jam-A-Ditty; Blue Is The Night; Passion Flower; Take The A Train; Mood To Be Wooed; Caravan; Bond Promo; Don’t Take Your Love From Me; Take The A Train; The Blues; Bond Promo; Sono; One O’Clock Jump; I’m Just A Lucky So And So; Riff Staccato; Just A-Sittin’And A-Rockin’; Rockabye River; Jumping Frog Jump; Do Nothin’ Till You Hear From Me; Johnny Come Lately; Poinciana; On The Alamo; Three Cent Stomp; I Didn’t Know About You. CD2: Take The A Train; Stompy Jones; Moon Mist; Bond Promo; Just A- Sittin’ And A-Rockin’; I Can’t Believe That You’re In Love With Me; Sophisticate Lady; Bond Promo; Jennie: I’m Just A Lucky So And So; Come Sunday; Light; Bond Promo; We’ll Be Together Again; Hollywood Hangover; Subtle Slough; Bond Promo; Perdido; Time Alone Will Tell; San Fernando Valley; Stomp, Look And Listen; Concerto For Cootie; Long Ago And Far Away; Someone; Suddenly It Jumped; Things Ain’t What They Used To Be.