By DAVID ADLER
February 6, 2010
Sign in to view read count 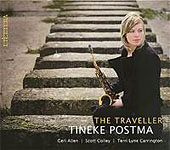 On Dutchwoman Tineke Postma's fourth outing, The Traveller, the young saxophonist leads a top-tier American lineup of Geri Allen (piano), Scott Colley (bass) and Terri Lyne Carrington (drums). Far from being overwhelmed, Postma holds her ground and even challenges the band with a set of strong original material, plus "Adagio 13," an adaptation of a string quartet movement by Heitor Villa Lobos.

In particular, The Traveller finds Allen in brilliant form—swinging hard, turning static harmony inside out, departing into lyrical abstraction on "Searching and Finding" and bringing an unusual clarity of touch to the Fender Rhodes on the oblique minor blues "The Eye of the Mind." Colley and Carrington are solidly matched, their interaction nowhere more vivid than during the otherwise subdued bass solo breakdown on the 7/8 tune "Motivation."

Determined to give equal weight to her alto and soprano work, Postma overdubs both horns on the opening "Song for F" and the funk-oriented closer "YWC" (short for "yes we can"), creating a call-and-response dynamic with herself. Early on in "The Eye of the Mind" she laces her sound with echo, in a possible nod to Jane Ira Bloom. On three tracks she adds wordless vocals by Anne Chris, who stays out of the way while giving some extra heft to the melody lines.

Song for F; The Eye of the Mind; Crazy Stuff; The Line; Adagio 13; Cabbonal; Motivation; Searching and Finding; YWC.