Stanley Clarke: The Toys of Men 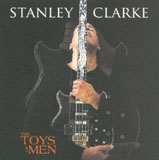 Stanley Clarke's influence continues to be felt long past his 1970s glory days as a member of pianist Chick Corea's flagship fusion group Return to Forever and as a solo artist whose School Days (Epic, 1976) remains required listening for any aspiring electric bassist. In the intervening years, despite the occasional high profile gig, he's been more heavily involved in soundtrack work and solo albums that, while pleasant enough pop/jazz, have never quite lived up to the promise of those early years.

Until now. The Toys of Men is a mature work from an artist who's got nothing left to prove, and is the closest thing to a fusion album Clarke's released since the inconsistent collaborative effort Vertú (Epic, 1999). A far more satisfying disc, it's a career consolidation of sorts, with Clarke also delivering a series of lyrical solo acoustic bass miniatures, referencing past efforts while, at the same time, playing with considerably more restraint.

That's not to say there aren't some serious chops happening. "Bad Asses" is five minutes of string-slapping, groove jamming with drummer Ronald Bruner Jr., a no less impressive player who is part of the core quintet that's featured on much of The Toys of Men, while "El Bajo Negro" is nearly eight minutes of Clarke alone on prepared and tuned acoustic bass, flexing the muscle and dexterity that brought him to attention in the first place, even before he'd picked up an electric instrument.

Elsewhere, he channels a 1970s fusion vibe on the powerful "Châteauvallon 1972." Reminiscent of a less raw Mahavishnu Orchestra despite it being a mere trio with keyboardist Rusian Sirota, it's Bruner whose energetic playing defines a track appropriately dedicated to the late Tony Williams. The up-tempo funk of "Come On," with the full quintet, including violinist Mads Tolling and guitarist Jef Lee Johnson, alludes back to School Days but is cleaner and, with Tolling a dominant voice, also reminiscent of Jean-Luc Ponty's more finessed fusion, while "Game" is a brief but visceral piece of greasy funk.

Even the softer tracks—the romantic "Jerusalem" and radio-friendly "All Over Again," featuring vocalist Esperanza Spalding (who proved herself no slouch on bass either at the 2007 Montreal Jazz Festival)—avoid feeling like sell-outs.

But it's the eleven-minute, six-part title track which opens the disc that makes it clear Stanley Clarke is back. Harkening, at times, to RTF's Romantic Warrior (Columbia, 1976), it's an epic fusion piece that's another feature for Tolling, whose brief but fiery exchanges with Bruner make both players worth following.

What makes The Toys of Men so rewarding is the way that Clarke successfully brings back the characteristics that made him such a dominant force in the 1970s, tempered with, perhaps, an older and wiser viewpoint. In a year where another fusion legend, John McLaughlin, has hit the road with some of his most lyrical playing ever, Clarke's return with an equally balanced form of fusion is just as welcome.