By Trevor MacLaren
November 16, 2005
Sign in to view read count 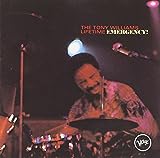 
A few months back I came across a great book written on the last forty years of jazz, Howard Mandel's Future Jazz. The book covered a lot of stylistic ground, including avant-garde, fusion, and free. It basically touched on jazz that Ken Burns never deemed a necessary part of jazz history. In a chapter on guitarist John McLaughlin, Mandel mentioned a band that Tony Williams had put together that was a huge influence on Bitches Brew, so I had to check it out.

Emergency! was not only one of the first fusion records, but also probably the defining record that introduced American audiences—and most notably Miles Davis—to John McLaughlin. Williams himself, at the age of twenty-four, was already a veteran of groups with Sam Rivers, Eric Dolphy, Jackie McLean, and of course Davis' second great quintet. His innovative style has put him in the same realm as Max Roach, Jack DeJohnette, Art Blakey, and Elvin Jones. But the glue of the record wasn't just Williams, it was the explosive combination of the Lifetime band with McLaughlin and organist Larry Young. Their expansive sound within the confines of a trio is pure genius. The sound is huge and the jams are rooted deeply in rock styles.

The hard touch Williams employed on the Davis quintet records rules throughout Emergency!. The Blakey vibe is definitely here, but Williams switches styles and tempo in mid-track. He can be tossing some hard bop, then flash in some Ginger Baker chops (Baker was the blazingly original and influential drummer of Cream). This practice helped to give the record a more rock-oriented sound than much of the fusion that followed. But McLaughlin's playing is some of his finest. McLaughlin's chops showcase the eclectic tastes that would be a building block in fusion and rock-jazz. His uncanny technique for knowing just how to lead not only his solos, but also the composition itself is genius.

In many ways this record works as a companion piece to Davis' In a Silent Way and Filles de Kilimanjaro. As well, Larry Young's organ playing differs greatly from the jazz organists of the era who played primarily soul- and funk-jazz. Young's style grooves closer to the sounds that were being used primarily in rock bands of the era. In this sense, the organ adds an almost spacey and trippy effect to the sound. But Young used jazz keyboard influences and textures for his solos. This mixture makes for a huge- sounding and eclectic record.

Emergency! is a sprawling epic that came out as a double album upon its release in 1969. Unlike some doubles of the era that were bloated affairs that sank under their own weight, its size worked as an advantage, not a deterrent. The compositions rarely reach over ten minutes, making the record more conventional in a rock sense. But most importantly the tracks themselves open up completely to rock music in its most primal forms. Sure, Bitches Brew is cited for this innovation, but Emergency! predates it and is every bit as solid, without using horns.

In fact, the combination of just guitar and organ gives this recording a more authentic rock esthetic. It seems quite obvious that Williams was a true fan of the genre and used it to its greatest effect. Take the jam "Where," which pulsates throughout, building and dropping, utilizing rock foundations and jazz chord structures. The album definitely sounds much like San Fran jam bands of the era who were using jazz templates for their spacey improvs.

Though the record now sounds a bit dated (like most fusion of the era), it is still innovative. Where progressive rock relied upon classical composition much of the time, this record is down-home jazz-rock. The only rock musician at the time who would come close to mixing a jazz rock hybrid this good was Frank Zappa, on Hot Rats. An often forgotten gem, Emergency! is one the genre's finest, with blazing jams that highlight each player's impressive chops. In fact, it's really essential listening for fans taking the next step from rock into jazz.