Tom Harrell: The Time of the Sun 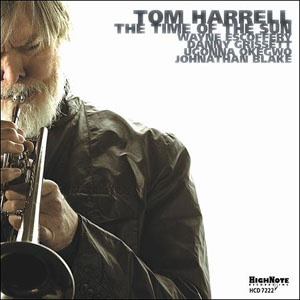 With all the media attention being given—and deservingly so—to hot young firebrands like trumpeter Christian Scott aTunde Adjuah, it's easy to overlook the older cats who've been quietly building a life's work where the only thing predictable is unfailing creativity. Tom Harrell may have turned 65 earlier this year, but he's still playing with the vigor of a man half his age, while benefiting from the wisdom that grows as the years pass, with little left to prove but plenty more to say. For The Time of the Sun—the trumpeter's fourth HighNote record in five years, with Roman Nights released just twelve months prior—Harrell continues his "if it ain't broke, don't fix it" philosophy with the most consistent (and consistently superb) lineup of a career now entering its fifth decade.

Harrell's playing isn't the only thing that's great about The Time of the Sun, another set of exciting and thoroughly contemporary original compositions. Harrell's music may occupy the same modern mainstream as the SFJAZZ Collective but, teamed with a quartet of thirty-something players possessing remarkable malleability and simpatico—and despite the orthodoxy of its tried-and-true trumpet, sax, piano, bass and drums lineup—the emphasis is absolutely on modern. That much of the material has been in the group's repertoire throughout its five-year existence speaks to an ability to hone it to its finest without losing the inspirational energy that, for many, comes early in the game when a song is at its freshest; Harrell's group plays all nine tunes as if it were the first time...and the last.

Combining fire and lyricism on the simmering, dark-hued "Estuary," Wayne Escoffery turns the heat up even further "Ridin,'" where the saxophonist shifts from implying his own harmonic forward motion over a two-chord, groove-driven vamp, to navigating a series of rapid changes at the end of each chorus with equal aplomb. Danny Grissett has, perhaps, come the most distance since meeting up with with Harrell a couple of years after relocating to New York in 2003, his ring modulated Fender Rhodes creating a swirling ebb and flow of countermelodies to the simpler tenor/trumpet line of the opening title track, with its slow, visceral pulse. Switching to acoustic piano for Harrell's solo—like Escoffery, demonstrating a keen ear for complex melodic form—the trumpeter equally inventive, whether playing over a pedal tone vamp or an ambiguous series of descending chords.

Harrell's charts may be tough, but they sound anything but. Bassist Ugonna Okegwo takes an opening solo on the balladic yet simmering "The Open Door," his thematic strength matched only by his unerring rhythmic support for Harrell, who returns for a round-toned flugelhorn solo. Drummer Johnathan Blake proves himself a broad-stroked colorist here, and a soloist of almost unbridled power on the Afro-Cuban "Otra," taking the album out on an incendiary note.